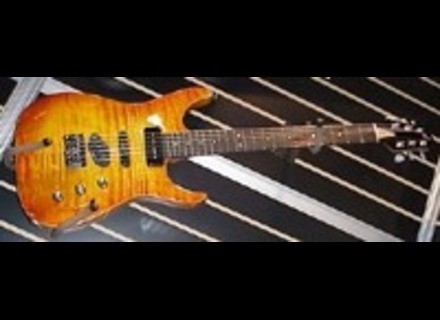 Jackson Triple Decker
4
Afficher la traduction automatique
Afficher l'avis original
Jackson went and decided to create some sort of unique hybrid guitar. By hybrid, I mean that they're trying to combine a telecaster, strat and les paul all in one guitar. It's a really unique take on things, but there are other manufacturers that do this way better, specifically Tyler. The guitar features a spruce body with a figured maple top, a mahogany neck with an ebony fretboard, 22 frets with dot inlays, a hard tail bridge, special telecaster/strat/P90 pickup combination, one volume, two tones and a five way switch.

The top on this guitar was really stunning. It had that classic style look thanks to the stain on it, but you also had this 3D depth to it that really popped in person. It's hard to really see what it's like without being there in person. The ebony on this actually had some streaks in it, and I was surprised to see that from Jackson. Most of their ebony boards are jet black. Not all people know this, but there is ebony out there that's almost like maple in terms of color. It all depends on what type of ebony you get. Most people just buy the jet black ebony or get ebony and dye it jet black. The bridge on this was decent, but I wasn't a huge fan of the hard tail bridge. In fact, I think a tele style bridge would have been a lot cooler on this, and it would have made that tele pickup spank all that much more.

The guitar had all Seymour Duncan pickups in it, and they sounded pretty cool for the most part. The bridge pickup was pretty much all that tele sound. It could do that spank without much of an issue, but I felt that it didn't have quite as much of that telecaster quality without the actual tele bridge. The middle pickup was actually a 59 Jr, and it didn't do the single coil sound that well as it was a humbucker. I wasn't a huge fan of this, really. The neck pickup got a really cool P90 sound, and I was able to bust out some sick blues riffs, but besides that, it seemed limited.