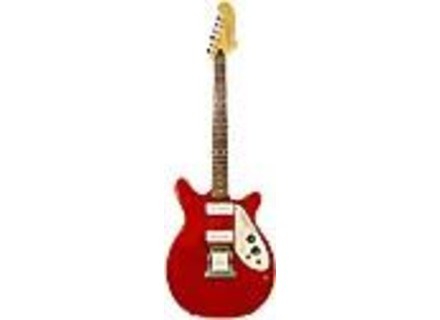 Micro Frets Stage II
5
Afficher la traduction automatique
Afficher l'avis original
The Micro Frets Stage II is a rare electric guitar, the one of which I have used was made in 1969. The guitar has two soap box style pick ups, along with a pick up selector and a tone and volume knob. I don't know where this guitar was made. The guitar also has a whammy bar...

Playing and using the Micro Frets Stage II hasn't presented any problems to me in the time that I've used it. I find it to be a pretty easy guitar to play, even if it doesn't have the most fluid neck that I've played in my day. It is easy to play all around the neck, making it suitable for both rhythm and lead guitar playing. It isn't too heavy of a guitar, and definitely has an interesting build and shape to it...

The sound of the Micro Frets Stage II is pretty unique. A lot of these guitars that are still around do have changes made to them in terms of the type of pick ups, so just be aware of this when looking at them. While great for playing any type of guitar part, I had the most fun playing lead guitar with this through a '65 Fender Deluxe Reverb amplifier, as I felt it was a great match with both the built in reverb and vibrato effects. The guitar doesn't have the thickest sound, but is overall a sound that will definitely cut through well. I've only used this in one studio with this amp, so I've yet to have a chance to try it out with different amps and configurations.

Overall, the Micro Frets Stage II is a very hard guitar to find. It isn't the type of guitar that I sought out at all, rather one of the studios that I've worked at had it on hand. I can't imagine that anyone would have their heart set of the Stage II considering how hard it would be to find, but I would guess that they would show up on eBay every now and again. If you ever get the chance to try or buy the Micro Frets Stage II, I think you'll find it to be a very cool and unique guitar.
Le&nbsp;Micro-Frets&nbsp;Stage II est une guitare électrique rares, celle que j'ai utilisé a été faite en 1969. La guitare a deux micro type "Soap bar" (boîte à savon), un sélecteur de micro et deux potentiomètres tonalité et de volume. Je ne sais pas où cette guitare a été faite. La guitare a également une barre de vibrato ...