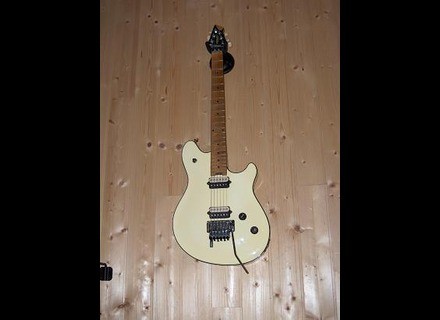 Peavey EVH Wolfgang
3
Afficher la traduction automatique
Afficher l'avis original
This was another one of those guitars I drooled over for many years before actually pulling the trigger on. I should preface by saying that I'm a HUGE Van Halen freak, so when the opportunity to get a top of the line Wolfgang Standard Deluxe last April, I jumped at the chance. Mine was a very early model (1997) Patent Pending Standard Deluxe. It had a basswood body with a maple top, an oil finished maple neck with 22 frets, a Peavey designed double locking tremolo system and a pair of Peavey humbuckers designed specifically for the Wolfie by Ed himself. It has a very cross-set of features that is somewhat like a cross between a Les Paul and some sort of superstrat (IE: Charvel, Kramer, etc.) and as a result I figured that, being primarily a Les Paul player at that time, the Wolfie would be very appealing to me. The neck had an extremely easy to play feel, due in no small part to two things. The oil/satin finish that was applied to the maple neck and fretboard, as well as the VERY comfortable asymmetrical neck profile of Ed's own design. The neck was definitely the high point of the guitar's features... as it was very comfortable to hold and play, and made it very easy to glide up and down the fretboard at warp speed for those fast and slide-y Van Halen esque runs.

As stated above, the Wolfgang is almost like a cross-breed between two guitars that Ed loves... the Les Paul, and the LA superstrat (Charvel, Kramer, etc.) At its core I found it to be more like the former (albeit with a longer scale length and a tremolo) in terms of its feel and the tones that it offered. Surprisingly enough, I found that the guitar was not very ergonomic in its design. It was definitely on the heavier side weight wise and lacked the contouring to really feel like a fast, sleek guitar. Mind you, mine had an arched top which helped somewhat... but it still was nowhere near what I'd have expected from an EVH designed guitar. The upper fret access was definitely decent. I was able to reach the top 22nd fret without issue. This was probably helped quite a bit by the neck's oil finish and the really nice asymmetrical profile. The biggest caveat I have with the layout and setup of the guitar as far as features go is that I would have preferred a 24.75 scale length (IE:Gibson) because that is what I was more used to at the time, and I felt that it might have made some of the wide interval runs that I was doing a little easier on the hands and fingers. However, that's more of a personal thing than an issue with the guitar... as I didn't find my playing was at all hindered on the Wolfie... it just could have been made better with a shorter scale length. However it's VH's guitar, not mine.

When I got the guitar, I knew that it would nail one thing very well... Van Halen's trademark rock tone. It definitely does do that well, but what shocked me is that it really did nothing else beyond that very well. Definitely a letdown for me. I was using a plethora of different amps at the time I had the guitar (Genz Benz El Diablo 60C, Peavey Vypyr Tube 60 combo, Peavey Classic 50 2x12, etc) and I just could not get any tones that I liked aside from the Van Halen rock tone. Mind you, like I said I'm a huge Van Halen fan, so that's not a BIG disappointment but it was still a bit of a letdown. The neck pickup was definitely not my cup of tea. It was far too bassy and flubby with not enough note definition. Clean tones just sounded rather muffled with that pickup, and the distortion tones had a very booming quality that I just could not get along with. The bridge pickup was great for that Van Halen vibe for sure... but I didn't find that it could do anything else very well. I guess Ed likes a pickup that lacks midrange (according to how this one sounds anyway.) Unfortunately, I'm the antithesis of that. I find a midrange tone absolutely essential to my style, and I found that unless I was playing VH... I just found myself shaking my head. To cap it off, I found that the volume and tone controls had possibly the worst taper I've ever seen (they may as well have been on/off switches.) Volume swells or doing the "roll back your volumes for rhythms, bring it up for leads" trick wasn't going to work with this guitar...

Perhaps it was just my specific Wolfie... but all in all the sounds were mostly a disappointment. I love EVH... but a guitar that costs as much as a Wolfie does should be capable of SOME other sounds. The newer EVH branded Wolfgangs seem to have addressed this to a degree... as the pickups are much livelier and more response to clean and low gain settings. I found that I could get it to sound very good through a modeling rig... but as soon as I brought a tube amp into the equation... it just did not deliever. Ah well. C'est le vie I suppose.

All in all, I felt that (my) Wolfgang was definitely a mixed bag. I loved certain aspects of the feel and tone, but many of the others just fell completely short of my expectations. I got on really well with the factors that made me play/sound more like Eddie... but any time I tried to branch out and try to get another sound it just wasn't happening. I'd played numerous Wolfgang's years before and waited a long time to get one... so my feelings were understandable. The guitar itself played very favourably, with a good low action and a slick feel... but unless I felt like playing Van Halen... I would always reach for another guitar before this one. There were certain features that I thought were interesting and useful like the D-Tuna dropped D tuner or the reversed pickup switch... but in the end it really didn't matter too much as I was basically left with a one trick pony. Granted, it's one of the best one trick ponies out there... but only if you like Van Halen.