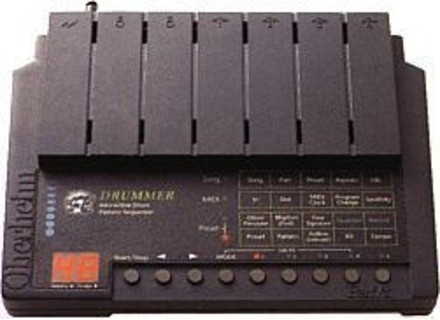 The Drummer is an interactive drum pattern sequencer, in essence "the brain of a drummer crammed into a little box" It contains no internal sounds but should rather be used in conjunction with a sound module or sampler to play drum sounds via MIDI. The Drummer was originally issued after Oberheim was bought by Gibson in a line of "Perf/X" modules which were specifically designed to process MIDI data in various ways. Having been discontinued for a couple of years, the Drummer, Strummer and Cyclone has been reissued in 1995.

100 preset patterns, with 100 variations each. 100 memory locations to store combinations in. 13 programmable patterns. 16 programmable songs that can contain 16 parts each. Parts can be repeated as needed.

About the size of a 7" single, and approx. 2 cm. thick. Designed for desktop use.

The Drummer will inspect an incoming MIDI data stream and adjust its playing style to the way the other instruments are being played. It is programmable in the sense that a song structure is built from patterns. To use it, simply extract the structure of your song in terms of styles needed, verse, chorus, bridge, tempo changes, time signature changes etc, and build the song using this information.

The most exciting features of the Drummer are the interactive ones. It can be made to follow the volume of your playing by scanning the MIDI data it is fed. As you play harder, volume increases, cymbals are used (if they are appropriate in the context), and when you enter the mellow verse, snares evolve into cross-sticks etc. It can also detect "gaps" in your performance, silence or chords that are held, and insert small fills and syncopated hits, and play stricter when the mix is dense. Also, by using the foot pedal inputs, additional percussion breaks can be cued, as well as fills, silent breaks, etc.

The software in the Drummer is unfortunately not entirely well-designed. Reportedly, sys-ex transmissions to it can make it choke and lock up, and in average the unit locks up at least once per session over regular MIDI data. This is a shame as it really should be used in a live situation, but who dares?

It's a pity Oberheim/Gibson didn't take the time and effort to straighten some of the bugs out, especially now that all modules in the Perf/X line has been reissued. Dumping sysex data to and from the unit is an exciting adventure which often result in system lockup. Also, there's a mode where the bass drum can be made to follow the bass part of the keyboard. Unfortunately, the unit insists on emitting a bass kick every quarter note, and the result are flammed or double hits which in practice renders this mode unusable (unless your sequencer can deal with problems like these). Also the internal resolution is a measly 24ppq which makes some of the patterns a bit stiff.

This is not a machine to use entirely for the drum production. But it's a creative tool that can provide many an idea when programming the drum parts, and the interactive modes makes for hours of fun jamming with the unit. As you've already guessed, this isn't a substitute for a real drummer (although a friend of mine who is a drummer reeeferred to it as 'uncanny'), but there's some really powerful algorithms lurking in the depth of its twisted operating system. Most of the patterns have "envelopes" that introduce variations in the beat to avoid loop stiffness, and you won't catch it playing the same fill two times in a row. The fills and extras are generated, not pre-progammed which adds to the realism as well. Also the programmable drum kits (via MIDI numbers) is a good idea, albeit a little restricted to only 16 sounds.

Try to avoid feeding it sys-ex. Try assigning other than drum sounds to it (a minor scale for instance). Try feeding it a program change every once in a while. Try the tempo variations (that are gradual, not abrupt!) to kick some power into the chorus. Use it as a jam partner during the early stages of the song construction (unless you prefer to start with the drums).