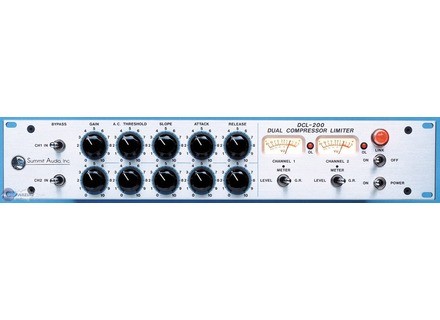 Summit DCL-200
5
Afficher la traduction automatique
Afficher l'avis original
The Summit DCL-200 is a dual channel compressor/limiter in the form of an analog piece of outboard gear.  The unit has XLR connections for inputs and outputs, and also has 1/4 inch connections for linking and side chain.  Each of the two channel has the exact same make up.  The DCL-200 is indeed a rackable piece of gear and it will take up two spaces in a traditional rack space.

If you know how to use a compressor and are aware of the standard parameters that come along with the, the Summit DCL-200 won't present any problems for you.  Each of the channels has parameters for gain, threshold, slope, attack, and release, so if you've seen a compressor before you know that these are pretty ubiquitous parameters as far as compressors go.  Each channel also has a bypass switch and a switch to choose what type of VU metering you will be witnessing.  Since there isn't anything out of the ordinary here, unless you are unfamiliar with the make up of compressors, I don't think that you need to have a manual around.

It's hard to describe the sound of the Summit DCL-200, as it is really something that needs to be heard for yourself.  Summit is known for their top notch outboard gear, and the DCL-200 maybe their most impressive piece of gear.  It sounds great on just about anything that you would want to try compression on, as I've had success with it on vocals, drums, bass guitar, electric guitar, and electric piano (Rhodes).  I can't say that I've ever set a signal to it that I didn't end up liking on the other end.  The vast amount of parameters this has to offer makes it easy for it to adapt to just about any situation...

Although expensive, the Summit DCL-200 is one of the best modern day made compressors that I've used.  You really can't go wrong with a piece of Summit Audio gear, as every piece of equipment that I've used made by them has helped me out immensely.  The price will undoubtedly make this inaccessible for most home studio owners, but for those that can afford it and for those that are looking for a high quality stereo compressor regardless of price...