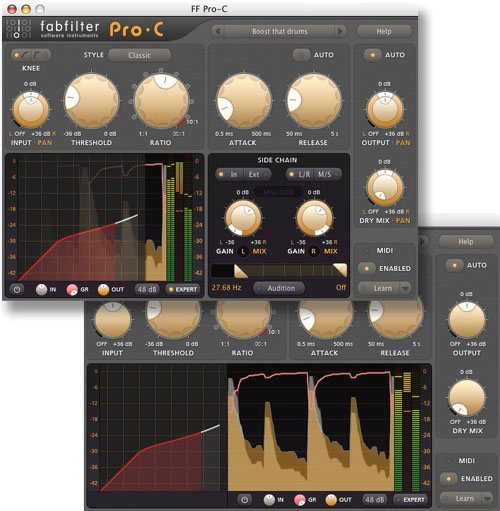 (contenu en anglais)
Afficher la traduction automatique
Afficher l'avis original
The FabFilter Pro-C is an extremely flexible and unique compression plug-in that is available for all systems and platforms as far as I can tell. I don't own the plug-in myself, although I sure wish I did! Since I don't yet own it, I can't speak to the installation process. A producer who I work as an assistant for has most of the FabFilter plug-ins on his system at home, so I've been messing with them whenever I'm working over there with him. There's a ton that can be done with the Pro-C, so don't expect it to be the kind of plug-in where you're going to learn everything about it after one usage. The main parameters are pretty standard simple, with settings for input/pan, threshold, ratio, attack, release, output/pan, mix, and an additional side chain. The graphs here are really what set it apart, as I don't think I've seen too many that actually will show you the knee compression graph. The plug-in has three different modes to choose from as well - classic, opto, and clean, while it also has a more standard compression graph as well. If you're buying this plug-in, you might as well have the manual around as to not miss anything.

I don't know all of the details about the system that I've been using the FabFilter Pro-C on, but it's Pro Tools HD which really says it all. It doesn't take up as small amount of processing power as many plug-ins out there do, but by no means did I experience any problems running the software on this system. If I were running it in Pro Tools LE this might be a different story, but it all depends on the full system you're running it on...

(contenu en anglais)
Afficher la traduction automatique
Afficher l'avis original
This is used mainly on a Mac Pro Duo running Snow Leopard. If you are familiar with compression than you will not need a manual. This plugin has the standard compression components including hard/soft knee and the ability to toggle between Clean, Opto and Classic (which sounds like FET to me). The boys over at FabFilter really do a great job making an inviting interface. This is still quite a busy interface especially with the Analyzer window dancing around, but it remains easy to look at with big writing and large knobs and graphs. All functions are easily located directly from the face of the plugin.

The Pro-C is very solid and accurate. No crashes or glitches of any sort. As for performance, this is a great utility compressor. Both the Opto and the "Classic" add some character but the Clean channel is really my favorite, as it is quite clean and great for electronica. Sidechaining is a breeze thanks to Logic's built in GUI Header. You must select "EXT" in the expert menu on the Pro C first. Overall this plugin has been used a lot lately whenever we need compression that doesn't add much character.

This is a overall great plugin but the thing that stands out for me the most is something very simple....Undo/Redo buttons! Thank god some people still realize how valuable those are, especially if you have the parameters midi mapped and you accidentally bump one or have your midi controller force the plugins to match the hardware. Thank you FabFilter, I hope the rest of the Developers realize the importance of that little extra help. Not much to dislike about this plugin. It's relatively simple and does a good job. Everything about what FabFilter does is precise. The knobs are very fluid and everything flows. Kind of like migrating to Mac from PC. I have used many compressor plugins. My favorites are the Waves for character and before this plugin, I used the built in Logic compressor for most of my utilitarian stuff. Pretty expensive for the whole lot but these are solid plugins. I would recommend.
Ceci est principalement utilisé sur un Mac Pro Duo fonctionnant sous Snow Leopard. Si vous êtes familier avec compression que vous n'aurez pas besoin d'un manuel. Ce plugin a les composants de compression standard, y compris le genou dur / mou et la possibilité de basculer entre Propre, Opto et Classic (qui ressemble à FET à moi). Les garçons de plus au FabFilter vraiment faire un grand travail faisant une interface accueillante. Ceci est encore assez d'une interface animée en particulier avec la fenêtre de l'Analyseur de danser autour, mais il reste facile à regarder avec l'écriture et grands gros boutons et des graphiques. Toutes les fonctions sont facilement localisés directement au front du plugin.