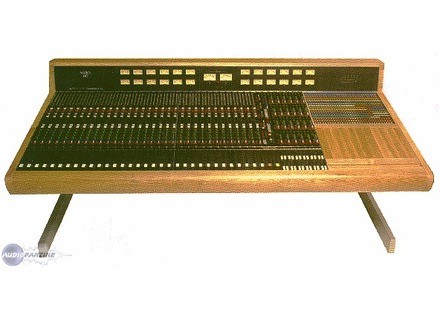 Trident Series 80
5
Afficher la traduction automatique
Afficher l'avis original
The Trident Series 80 comes in a few different models - I should start off by saying that the one that I've used is the 80 B. The console has 32 channel strips that include mic preamplifiers and equalizers, as well as all of your standard parameters like panning, aux, and other routing options. I don't know too much about the connections that it has, as I've only used the board a few times when it was all good to go, meaning I never had to do any patch work with it. It isn't an automated board, and is an all analog console.

As with all consoles, using the Trident Series 80 definitely takes some background knowledge of consoles in general. If you don't understand the features and parameters on this board, chances are that you need to learn about consoles in general. For those that do understand how to use consoles, even if just a little bit, the Trident Series 80 should seem pretty familiar to you. This isn't a quirky console and is really straight forward and to the point. The meters on the board are big and easy to read, which comes in very handy when getting levels. If you're looking to learn all of the ins and outs of this board I'd suggest having the manual handy, but I haven't seen it so I can't say anything about it's general make up.

In a couple of words, the Trident Series 80 sounds pretty darn good. It definitely has its own particular sound, but doesn't stray too much from the pack so it isn't like it will give you unheard of sounds. The mic preamps come across as thick and full of clarity, but I definitely wouldn't say that this is a 'clean' board when compared to others like SSL. It more closely resembles a Neve console, but again like I said before, it does have a sound all its own. The mic pres are definitely the main attraction with the 80 Series, but the equalizers are pretty awesome as well, with a lot of room for control.

I first used the Trident Series 80 about a year ago, and have only used it a number of times in a professional recording studio. I'd love to get back there when I can, as this console was definitely the main attraction and I loved using it because of the overall sounds that I was able to get from it. These aren't made anymore, but you can still find them every now and again if you're interested in one. Definitely a beautiful console to have as the main piece of your studio...
La série Trident 80 est livré dans un petit nombre de modèles différents - je devrais commencer par dire que &nbsp; celle que j'ai utilisée est une B. 80 La console dispose de 32 voies &nbsp;qui incluent des préamplificateurs micro et des égaliseurs, ainsi que toutes les fonctions standards comme: le panning, aux, et d'autres options de routage. Je ne connais pas trop &nbsp;les routing qu'elle propose , car les rares fois où je l'ai utilisée, tout était déja prêt, &nbsp;ce qui signifie que je n'ai jamais eu à faire un travail de "patch" avec elle. Ce n'est pas une &nbsp;console automatisée, &nbsp;c'est une console entièrement analogique.