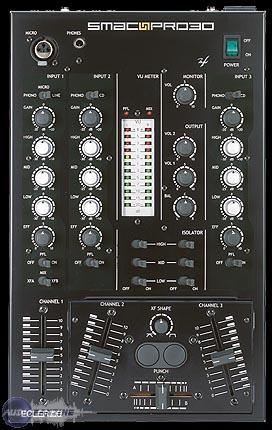 (contenu en anglais)
Afficher la traduction automatique
Afficher l'avis original
While not at the level of a high end Pio mixer with effects built in etc, this mixer definately has enough features to satisfy most DJ's. There is the usual set of RCA connections, with a phono in and a line in for each channel. There's also an Effect send/return for hooking up effects processors to the EFF knob, which controls the send of the postfader signal to your effects processor. Getting back to the connections... OUT1 is a set of balanced XLR connections, and is controlled by the Vol 1 knob indepenantly from OUT2 which is the standard RCA jack. There's also a Mix out which is untouched by either Volume knob. You'll find the usual set of EQ's and Kill switches which work great, with very good separation. The EQ’s are -30db to +10 on the High and Low, and -25 to +10 on the Mid. Queuing is handled by 3 PFL switches, one for each channel, that, when turned on, send the channel's output to the headphones. That means you could have just one, two, or all channels sent to the headphones if you wish. It doesn't split the sound up though, you'll hear each channel in full stereo. There’s a panning knob so you can bring the mix from the left to the right, etc, but it’s only on the master out. I would have liked to see that on each channel separately.

Hooking it up tricked me for a second because I’ve never used a three channel mixer before. The tables (or CD players) need to be connected to channels 2 and 3, not 1 and 2. Channels 2 and 3 are permanently assigned to the cross-fader, and channel 1 can be assigned to either side of it by means of a toggle switch on channel one's controls. Besides set-up, it's a breeze to use, even if you've just started DJing. Then again... mixers are pretty self explanitory.

Honestly, I've only used this mixer as a bedroom DJ where it's hooked up to an RCA surround reciever. It sounds absolutely great home here, but I can't tell you exactly what it will sound like in a bigger venue, with a larger PA system.

One of the first things I noticed is how smooth the faders are, but they’re not tough to move like some. They’re just smooth. The same goes for the knobs, which have the usual feel to them: smooth with a bit of resistance. The EQ’s have a center dip which I think is a bit too deep, so if you were going to go by it, the knob might get stuck for a fraction of a second. Not really a big deal, but it’s there. Other than that, this mixer is SOLID, and pretty weighty. I don't doubt that it could be dropped more than a few times and still function.

I fell in love with this mixer out of the box, as did a friend of mine who ended up buying one as well. I would definitely suggest that any mixologists out there with a 400 dollar budget for a mixer to pick up a SMAC 30.