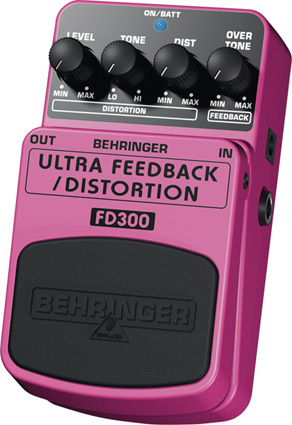 (contenu en anglais)
Afficher la traduction automatique
Afficher l'avis original
This pedal is a pretty cheap pedal, I needed a distortion pedal but didn't have a whole lot of cash to spend on one. I went with this because I figured I'd be getting noisy. It's a pretty barebones setup in general, there is a knob for Volume, Tone, Distortion, and Overtone (Feedback). This pedal has no MIDI or computer editing capabilities, and is not rackable as it's just a pedal.

Using this pedal is pretty basic. It's not that easy to get the feedback effect, at least not at a level or with a sound that I like at all. I'm just not too impressed with that effect at all. I definitely don't prefer it to actually getting real amp feedback, which I've enjoyed doing for quite some time now. I don't have a manual but I don't really need one anyway, with most pedals it's better to learn based on intuition anyway. It doesn't take much intuition to realize that this isn't a great pedal.

I really was incredibly disappointed in this pedal all around. You know a pedal is really bad when it makes a great guitar (a 20 year old Fender Strat '67 Reissue) and a great amp (Fender Twin) sound bad. It drastically alters the tone of my guitar to a really undesirable sound. I don't really like this for anything. The distortion itself doesn't have any punch, or body to it. It's anemic and weak, and just muddies up the sound without giving any power. As I said before, the Feedback effect I was looking for feels really artificial and grating, unlike real feedback which I tend to love as it can be quite cathartic and moving.

I don't really know what else to say about this pedal, it's typical of Behringer (some would say their products are hit or miss, I personally tend to think they are on the miss side of that debate pretty often.) It's certainly worth the price, simply because it's so cheap. If you are looking for something that sounds awful, because that's the sound you're going for, I recommend this pedal. Don't expect to impress anyone with this tone, because there's nothing going for it. I would never buy this pedal or recommend it to anybody, and in fact, it's made me never want to touch anything Behringer makes again.
Cette pédale est une pédale assez bon marché, j'avais besoin d'une pédale de distorsion, mais n'a pas eu tout un tas d'argent à dépenser pour un. Je suis allé avec cela parce que j'ai pensé que je serais obtenir bruyant. C'est une configuration assez barebones en général, il ya un bouton de volume, tonalité, distorsion et Overtone (feedback). Cette pédale n'a pas des possibilités d'édition MIDI ou un ordinateur, et n'est pas rackable que c'est juste une pédale.