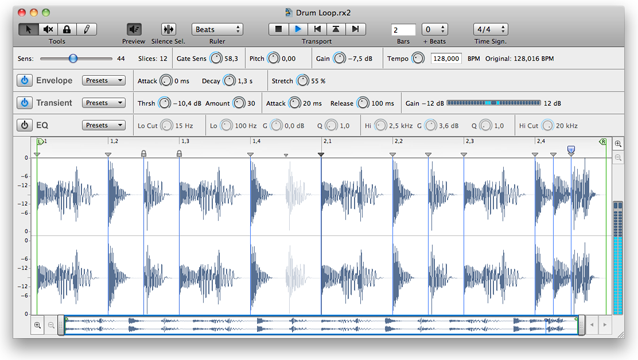 (contenu en anglais)
Afficher la traduction automatique
Afficher l'avis original
I've been using Recycle 2.1 in for a long time now and still use it sometimes to cut up some basic vocals or something.. Whether you plan to clean up individual audio tracks or record and mix a song, Recycle is relatively intuitive and easy to use.

The program is pretty small, meaning that it runs pretty efficiently on a variety of computers. I've only had it crash on me a couple of times, which I suspect is more due to Windows problems than that with this software. I run it on a Pentium 3 with Windows XP Service Pack 2. I am easily able to record on 8 tracks at a time with my M-Audio Delta 1010 LT sound card. But for the most part you will have no issues getting it running. it’s a pretty basic program that poses no problems at all. A lot of people have used it with many different computers and have no issues.

I now prefer to record with a real mixer with actual knobs, rather than "virtually." (most all programs can mix with a virtual mixer but it never feels like a real one to me) If I were in the business of recording and mixing bands, I likely would use this software or Pro Tools or some other DAW mixing program as it would be very easy to make subtle changes to the mixes, as they would be saved on hard drive. But, since I'm recording for myself, I work how I prefer to, which is mixing by hand. If I were employed by a band, or were in the habit of doing so, Recycle would be invaluable to me in order to make the minute changes to make the recording artist happy, whereas with how I work now I would have to likely start the mix all over again. Instead, I don't have the time or energy to focus hours and hours on a single song, so mixing by hand gets it done for me and keeps me happy. But, I would have no real qualms about mixing with CEP, and have done so in the past.

Is the general configuration/setup simple?
The setup of ReCycle is confusing at first but it is easier if you understand waveforms and can identify where each beat is in the loop you are working with.

Is the manual clear and sufficient?...
The manual gets pretty hairy at times, it's easier to have somebody teach you how to use it. Fortunately that's how I learned how to use it.

Are the typical functions easily accessible?
The basic functions of ReCycle are pretty easy to access. There isn't a lot of backtracking and changing settings involved with using the program.

Does the software work correctly in this configuration?
The software is designed to isolate each element in a drum loop. If a drum loop is put into ReCycle, the program isolates each note and allows you to set the tempo to a BPM of your choice. These loops can then be used in programs like Logic and Reason.

What performance are you getting? (if quantifiable)
Overall, the program itself identifies 90% of the notes played in each loop. It is up to the user to isolate each note from there. It actually can get pretty tricky if you are dealing with a complex loop, but overall, it's not too difficult. It allows you to work with an astonishing number of samples and loops that would be difficult, if not impossible, to work with otherwise.

Is this configuration (software and gear) stable?...
There's isn't a whole lot of gear necessary to run this program, so the configuration doesn't really provide any issues that need to be dealt with.

For how long have you been using it?
I've used this program for about six months. After a few days I was really good at doing loops, which was helpful.

What thing do you like most/least about it?
I feel as though I would use this program more than I do. Considering I prefer to record live instruments, and I'm more of a ProTools guy anyway, this isn't really as helpful as I would have hoped. That being said, if processing drum loops and using them for your own compositions is your thing, this is a pretty great program. You'd probably having a difficult time without this or a similar program.

What is your opinion about the value for the price?
I think most software is overpriced, but compared to most audio programs this one isn't too bad.

Knowing what you know now, would you make the same choice?...
I personally wouldn't unless I needed to use Logic and drum loops more. Currently I have no use for it. That being said, it's still a great program.

Precision and quality of the sound?
The software is pretty great in terms of sound quality. It doesn't degrade the sound of the loop at all, which I've had problems with when trying to use other methods of slowing down drum loops. It also can get very detailed with the intricacies of more complex loops. This is definitely what makes the software worthwhile.
Y at-il des problèmes de compatibilité?
Il n'y avait pas de problèmes de compatibilité lorsque je installer ReCycle.