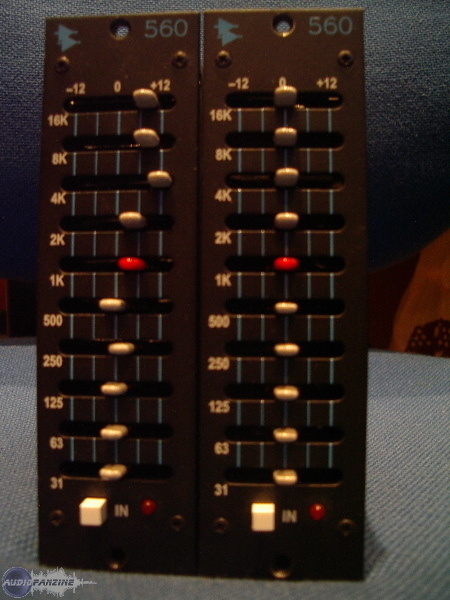 (contenu en anglais)
Afficher la traduction automatique
Afficher l'avis original
The API Audio 560 10 Band Graphic Equalizer is a 500 series module, designed for placement inside the API lunchbox. These types of modules are becoming more and more popular due to their reduced price when compared to rack gear, and because of their compact nature. The 560 is made up of all analog parts, with ten bands at ten different fixed frequencies. It isn't rack mountable in a traditional space, but rather fits in the lunchbox.

If you know what a graphic equalizer does, you'll understand everything you need to know about the API Audio 560 10 Band Graphic Equalizer right off of the bat. It is a very simple equalizer, consisting of ten bands that can either be cut or boosted at ten different fixed frequencies ranging from 31 Hz to 16 KHz. They are well choosen frequencies, and are ones that I often find that I wanted to be cutting or boosting at anyway. I'm using not a huge fan of using graphic EQs since they don't offer up as much flexibility as a parametric EQ, but I never had an issue with the 560.

The sound of the API Audio 560 10 Band Graphic Equalizer is crystal clear and very transparent sounding. It is suitable for use with instrument or voice, as I don't think it will necessarily work better on one thing over another. It just depends on what you'd like to do with it and if the frequencies will work for what you're trying to achieve. However, beyond what the frequencies themselves are, the 560 is extremely clean sounding and will do its job very well. I generally only need to cut or boost a couple of decibels to do the job with the 560.