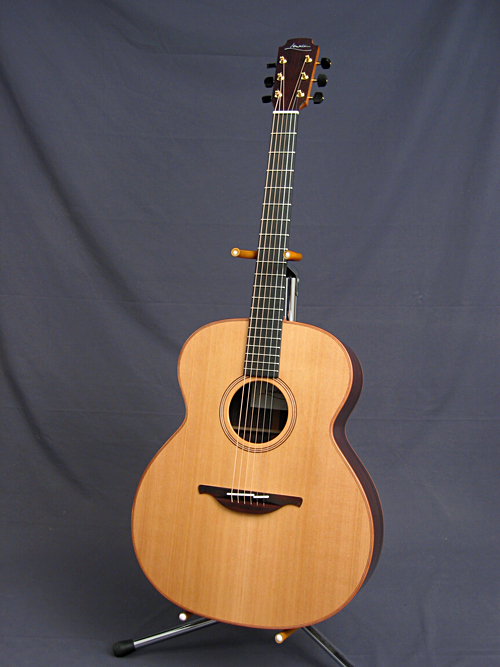 (contenu en anglais)
Afficher la traduction automatique
Afficher l'avis original
This is a unique acoustic guitar. It's made in Ireland, which is interesting, and it actually sounds perfect for many Irish folk tunes. It has a rosewood neck and fretboard, a rosewood back and sides, and a cedar soundboard. It has 21 frets, and is acoustic, so it has no pickups or volume controls.

The last few frets on this guitar are hard to reach, but it's almost definitely more of a rhythm guitar anyway, so that's not a huge issue. Getting a good sound on this guitar shouldn't be too difficult for anyone. It isn't too heavy or too light, and it isn't an awkward guitar to play by any means. It certainly plays like a dream, very smooth and gentle without requiring too much brute force to play.

I personally think this is a fantastic guitar. It's incredibly smooth and warm for an acoustic. There is never any unnecessarily high or bright overtones coming out of it. I think as a guitar, it's perfect for folk musicians, be it American or English folk. I also think, as I said before, that it would be great for Irish music as well. If what you are going for is more along the lines of Neil Young, this might not be your thing, as it really isn't twangy at all. However, the sound is beautiful. I've noticed that when I strum it hard, or fingerpick it gently, it responds well to dynamics. This is especially helpful in recording, as each dynamic level sounds relatively consistent. This has been an issue for me in the past. If anyone is familiar with the acoustic guitar playing of Richard Thompson, the tones you get are somewhere in the ballpark of his sound on songs such as "1952 Vincent Black Lightning".

I can't say there's much I don't enjoy about this instrument. It's very much a smooth and full-sounding guitar. It plays beautifully and is very versatile. I think it's a very expensive guitar, but this is because the Lowden company is smaller and devotes more time to detail. I think that there aren't many other acoustics that are very comparable to Lowdens, they are in a league of their own. I would highly recommend at least trying one of these guitars to anyone.
C'est une guitare acoustique unique. Il est fabriqué en Irlande, ce qui est intéressant, et il semble effectivement parfait pour de nombreux airs populaires irlandais. Il a un cou de palissandre et manche, un dos et éclisses en palissandre, et une table d'harmonie en cèdre. Il dispose de 21 frettes, et est acoustique, il a donc aucune micros ou les contrôles de volume.