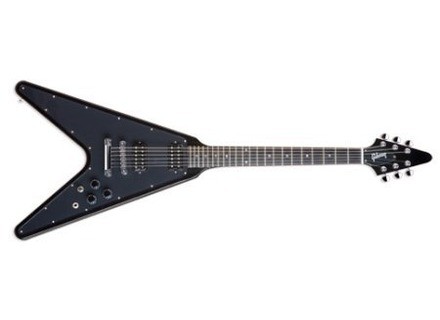 Gibson [Guitar of the Week #31] Flying V New Century
4
Afficher la traduction automatique
Afficher l'avis original
The Gibson guitar of the week line is a series they did where every week they would tool up and produce a different unique guitar. Sometimes these guitars were old discontinued models. Other models were models that could have been made but never were. This one is a unique modern model that could have been made but never was until now. This guitar reminds me a lot of the old Wayne Static signature Flying V. It looks like something he would play as well. This guitar is pretty much a 67 reissue flying V with the crazy carbon fiber pickguard on it to give it a metal look. The guitar is made from solid mahogany with a mahogany set neck. The neck is 22 frets with a ebony fretboard. The neck is not bound. It has two volume knobs and one tone knob and a 3 way pickup selector. It has 496R and 500T ceramic magnet pickups in the neck and bridge respectively. These pickups are Gibsons own design. It has a traditional Les Paul style tune-o-matic bridge and stop tailpiece.

This V has the typical 67 reissue upper fret access which is not as good as the original 58s upper fret access. They changed the neck joint in the reissue to make the guitar stronger overall but the new design meant that upper fret access was slightly hampered. The carbon fiber pickguard covers the whole body which is pretty unusual. It also has a unique feel if you are not use to it. You get the same problems you get with any V. Some people may not like the feel while sitting down. Other people may love it. The neck balance may not be great. You have heard it all before.

I didnt have the manual with this guitar so I do not know what exact pickups were in it but they sound like the same 49'whatevers they put in most Flying V's. They are decent midlevel pickups that are decent at everything but that old saying rings true. Jack of all traits master of none. The bridge pickup gives you that traditional wide open classic rock tone. The neck pickup is smoother but it isnt super smooth. It still has a bit of bite to it. These pickups are okay. If you are playing more intense music you may need a set of more specialized pickups.