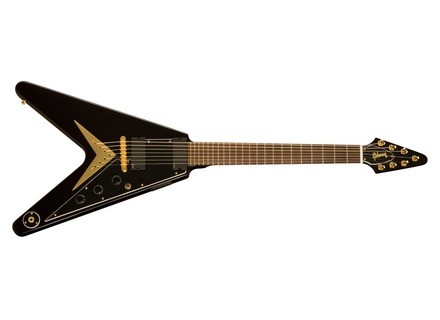 Gibson Flying V 7-String
5
Afficher la traduction automatique
Afficher l'avis original
Even with all the crazy limited run guitars Gibson puts out they were pretty late to the 7 string scene. This is the 7 string version of the Gibson Flying V. It has some good features and some bad features. Some of the good features is that it is pretty much a traditional Flying v. Two volume and a master tone with a 3 way switch. The fretboard is clean with no inlays which is cool but on a guitar this expensive they should have put on a ebony fretboard. The rosewood fretboard doesnt really fit with the rest of the black guitar. Gibson chose to use their traditional scale length which is not great for a 7 string. The neck 24.75 inch scale mahogany neck. Instead of trying to figure out their own 7 string pickups Gibson wisely choose to use EMG pickups. This guitar has a 707 in the neck and a 81 7 string version in the bridge. Because the pickups are active you will need to use a battery to power them. Gibson was nice to include a separate battery compartment so you dont have to open up the entire control cavity to change the battery for the pickups. I am suprised Gibson is still making this model because other Gibsons that came with EMG pickups have been discontinued and re-released with Gibsons own brand of active pickups.

The V shape naturally gives you good high fret access. The neck is slim but not as slim as I would like on a 7 string. A 7 string with a big neck is so much harder to play than a 6 string with a big neck because of the extra width. When playing standing up the guitar will naturally come to rest in the perfect position for playing. I like fretboards with no inlays but it might be a problem for some people who have not been playing guitar as long. There are always markers on the side of the neck. Speaking of the fretboard without any inlays the rosewood really stands out against the rest of the black guitar. Would it have been so much harder to give this guitar an ebony fretboard. The rest of the guitar is black and having the huge brown fretboard really stands out. The only problem with the EMG 7 string pickups is that they are so big they require a proprietary route. You would need major modifications to your guitar to change these pickups to another brand of 7 string pickups. The low B string on the stock set of strings is only a 59. I do not think this is enough for a low B on a 24.75 inch scale guitar. I have used a 60 low E string on 24.75 inch 6 strings before.

It would have been easy for Gibson to throw in some generic pickups in this and have it sound terrible but they didnt. Thanks to the EMG pickups this guitar sounds great. The 707 in the neck is great. The 707 tonally is like a mix between the 85 and 81. It is nice and thick like the 85 but still has the top end attack of the 81. The 81 in the bridge is a grind machine. It brings the clarity. This helps make up for the short scale of the neck. With this short 24.75 inch scale on a 7 string the low B will be pretty loose and flubby. This would produce a muddy sound with anything but the tightest pickups. The 81 is really tight and has lots of high end bite. These good pickups and the large body of the Flying V makes this guitar sound huge. If you want even more tone you can do the 18v mod to the EMG pickups to get even more tone. The 18v mod helps give you more head room and will help the EMG sound more natural. This especially helps warm up the clean tones which are generally the weakest part of the EMG's sound.