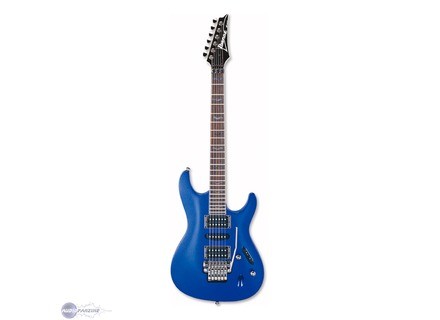 Voir les autres avis sur ce produit :
Afficher la traduction automatique
Afficher l'avis original
The Ibanez S-470DX is a long running guitar in the budget line of guitars that Ibanez offers. This guitar is for people who can't afford a Prestige model, and there are some telltale differences once you start playing these. There are tons of differences between the various incarnations of this guitar, but the one I played had a mahogany body, maple neck with rosewood fretboard, S style inlays, a ZR trem, two humbuckers with a single in the middle for HSH configuration, one volume, tone tone and a five way switch.

The fretwork on this model is definitely iffy at best. The one I played had lots of sharp edges, and the action wasn't able to go as low as I would have liked. To me, that's a big killer when it comes to selecting a guitar. The fit and finish seemed fine, but then again, there wasn't much to go wrong considering how much more basic this model was compared to other models. I'm glad they included the ZR tremolo as that's a very nice trem which feels super slick thanks to its ball bearing system.

FIrst of all, this guitar didn't seem to resonate as much as the Japanese Prestige guitars that I'm so used to playing. In fact, this guitar sounded pretty dull for whatever reason. Maybe it was just one of the unlucky ones. Anyway, the stock pickups on these guitars are absolutely horrendous. I didn't replace them with the one I played, but I'm generally the person who replaces stock pickups -- especially Ibanez ones. I find DiMarzios to work best in these guitars for whatever reason. My personal picks would be the Air Norton, True Velvet and Evo 2.