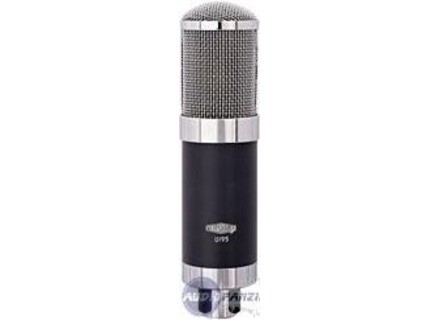 Soundelux USA U195
5
Afficher la traduction automatique
Afficher l'avis original
The Soundelux U195 is a large diaphragm condenser microphone that should only be used in the recording studio. It is a FET (field effect transistor) based microphone, with a standard cardioid pick up pattern. It has a 'fat' switch, which gives the microphone more bottom end. It also has a -30 db pad and a rumble filter which gives you -10 db at 30 Hz.

The Soundelux U195 is overall a very high quality condenser microphone without a lot of flexibility and cool features. For starters it has a great flat sound to it, and is more than capable of recording a variety of different instruments, including vocals. It's a really clean sounding microphone, but also has a good amount of warm and low end to it. The fat/norm switch really gives the mic an extra boost for certain situations where other microphones wouldn't be able to go. The other features also help to add to it's overall versatility. The best part about the U195 is that it will cost you a lot less than most high end condensers will. In that, it's awesome for home studio owners looking for a great all purpose microphone with the ability to adapt to many different situations. It's also great for professional studios, since it's definitely on a professional's level in terms of quality. It probably sounds best for vocals, but is definitely suitable for any situation where you'd want a large diaphragm condenser. Soundelux is now Bock Audio, so this microphone is now put out under their name. I'm not sure if they have made any changes in this microphone, but I don't believe that they has been any. The U195 is definitely a microphone that I think you should be aware of if you're interested in great sounding all purpose condenser microphone.
Le U195 Soundelux est un microphone à condensateur à large diaphragme qui ne devrait être utilisé dans le studio d'enregistrement. Il s'agit d'un FET (transistor à effet de champ) microphone base, avec un pick up pattern cardioïde standard. Il a une «grosse» interrupteur, ce qui donne le micro plus bas. Il a également un pad -30 dB et un filtre grondement qui vous offre -10 dB à 30 Hz.