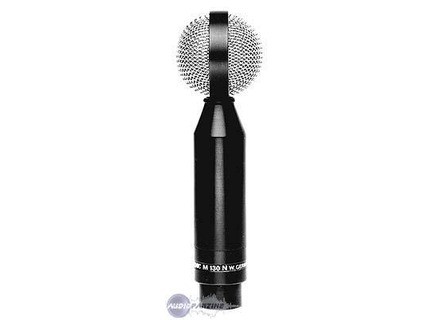 Beyerdynamic M 130
5
Afficher la traduction automatique
Afficher l'avis original
The BeyerDynamic M 130 is a unique dual ribbon microphone designed for use in professional recording studios. I've used the mic for some unique applications, and in general think it's a great microphone. The mic has two ribbons in, and works in a figure eight pick up pattern, as it picks up sound from both sides of it. It is a very small microphone and is extremely fragile, and as with all ribbon microphones it doesn't need any external power and in fact phantom power most likely will damage it. The mic will pick up frequencies between 40 Hz and 18 kHz, so it's capable of picking up pretty much any sound that a human can hear.

The few applications that I've used the BeyerDynamic M 130 have been rather on the strange side. I've used it for picking up a full drum kit, or at least to pick up parts of the kit, as well as for some electric guitars. For the drum kit, I put the microphone on above the kit and it's axis so both sides are facing out to pick up both sides of the set. The sound was a very cool one, although I think that the placement could use a bit of experimentation. For the electric guitar recordings I did with the M 130 I put it actually between two guitar amps that were projecting the same sound. Basically meaning that we had the same guitar going into two separate amps. I also used Shure SM57s on both of the speakers up close, but wanted to use the M 130 to get a different roomier and warmer type of sound to blend it with, and I think we ended up doing just that. I would definitely like to experiment more with the M 130 in terms of perhaps some more traditional applications and placements in the future, as I think it would be good for a variety of other things as well. The mic isn't unreasonable for a dual ribbon microphone. If you're looking to add a unique ribbon microphone from a very reliable company that knows what they are doing, absolutely look into the BeyerDynamic M 130.
Le BeyerDynamic M130 est un microphone à ruban conçu pour être utilisé dans les studios d'enregistrement professionnels. J'ai utilisé le micro pour certaines applications, et en général je pense que c'est un bon microphone. Le micro a deux rubans, avec une directivitée en 8: il capte les sons des deux côtés. C'est un microphone extrêmement fragile, et comme avec tous les microphones à ruban, il n'a besoin d'aucune alimentation externe (une alimentation fantôme risque de l'endommager. Le micro captera les fréquences entre 40 Hz et 18 kHz, il est donc capable de capter assez bien tous les sons que l'homme peut entendre.