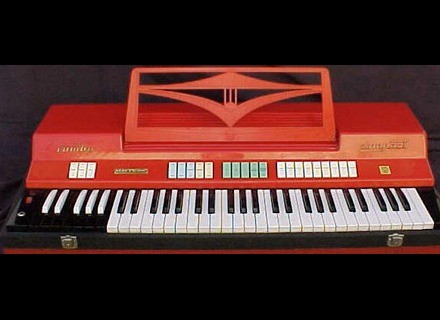 Farfisa Combo Compact
5
Afficher la traduction automatique
Afficher l'avis original
The Farfisa Combo Compact is an electric organ with a unique sound. The Farfisa sound in it's own is it's own type of organ sound, as it's pretty cheesy and thrives on this notion. This isn't too much unlike many of the other Farfisas out there, but it's hard to find one that's better than this as to me this one does it all. The studio I work at has one of these and it will see some use from time to time. It's definitely fun to play with to say the least. It's got an attached 1/4" cable as well as a built in power cord. The keyboard has full polyphony...

Operating the Farfisa Combo Compact isn't difficult. The keyboard itself spans about four octaves, and it has a pretty good feel although the keys are pretty light and flimsy. I think you're going to find this to be the case with any Farfisa, however. It's got a variety of controls to work with, including switches to control the bass volume, reverb, tone boosting, and the different voices. Included in the voice to choose from are strings, flute, oboe, bass, trumpet, and piccolo, with a few of them have multiple buttons for different sized sounds. It's a simple push and play systems, so no manual should be necessary here.

The sound of the Farfisa Combo Compact is everything you would hope it would be for those familiar with the Farfisa sound. If you don't directly know what this will sound like, you've certainly heard it on records. I like it as it's a great change of pace for to your more traditional sounding organ. It's definitely a cheesy sound, but that's the novelty to it in my opinion. There's also a good amount of differing sounds possible between all the voices on here since you can mix and match them.

The Farfisa Combo Compact is an awesome electric organ to have in any studio. I don't know if it's worth it to have one of these otherwise as it's somewhat bulky to bring around and is a sound that can be emulated digitally easier than most other instruments. I'm really glad that we have one at the studio where I work, as although it doesn't get used as much as the Hammond B3, it's definitely a nice color and option to have around. I don't know what one of these would cost, but it's certainly worth looking out for for any fan of Farfisas.
Le Pacte Combo Farfisa est un orgue électrique avec un son unique. Le son unique Farfisa a son propre type d'orgue, avec cette notion assez ringarde et prospère. A la différence de nombreux autres Farfisas, il est difficile d'en trouver un qui soit meilleur à mes yeux. Le studio où je travaille en a un et on voit une certaine utilisation de temps en temps. C'est vraiment amusant de jouer avec. Il a une entrée 1/4'' et le power chord. Le clavier a la polyphonie complète ...