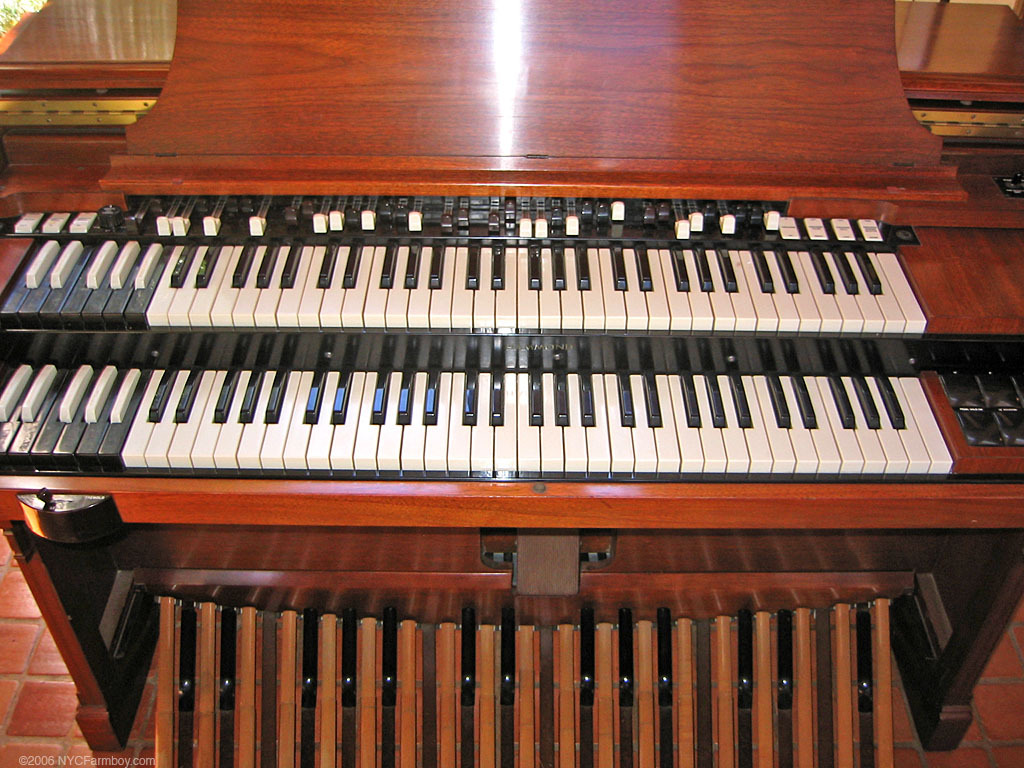 (contenu en anglais)
Afficher la traduction automatique
Afficher l'avis original
The Hammond RT3 is a bulky organ made up of all analog parts. It has two keyboards, each spanning about five octaves, in addition to the black preset keys on the left. It also has about two octaves of foot pedals. The RT3 has the full array of draw bars, as well as all the normal effects and sustain options that you would expect from a Hammond organ. It is a fully polyphonic organ, with no limitations whatsoever.

If you've got experience with real organs, using the Hammond RT3 will be very simple for you as it is pretty standard and straight forward for a Hammond organ. If you don't know too much about organs, then I'd suggest doing some research on the basic parameters that you'd find on organ, as this will help you a great deal not only with the RT3, but all other Hammond organs and organs in general. A manual for the RT3 would probably be pretty hard to locate...

From what I have been told, the Hammond RT3 is essentially the same as the holy grail of organs, the B3. It is definitely a bit bulkier, but the insides are supposed to be the same or very similar, resulting in the same sounds. If you know anything about organs, you should know that the B3 has the best tone of any organ out there, which is really an indisputable fact, so you're getting an incredible sound with the RT3. It is definitely a sound that is hard to describe, other than by saying is has a very full organ sound and is one that needs to be heard...

While not as readily available as the B3, the Hammond RT3 does command a slightly smaller price than a B3 would. It is definitely a bit harder to transport, but not matter what organ you're using, it will be hard to move, which is why the RT3 and organs in general make for better stationary pieces in a studio or home. I don't know how easy or hard it would be to get your hands on an RT3, but if you're looking for a genuine Hammond organ that is very close if not exactly like the B3, the RT3 is a legitimate option to look into.
Le RT3 Hammond est un organe volumineux composé de toutes les parties analogiques. Il dispose de deux claviers, chacun couvrant environ cinq octaves, en plus des touches noires prédéfinie sur la gauche. Il a également environ deux octaves de pédales. Le RT3 a la gamme complète des barres de traction, ainsi que tous les effets normaux et soutenir les options que vous attendez d'un orgue Hammond. Il est un organe totalement polyphoniques, avec aucune limitation.