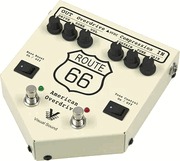 (contenu en anglais)
Afficher la traduction automatique
Afficher l'avis original
Visual Sound's Route 66 American Overdrive is a modern interpretation of the classic Ibanez TubeScreamer design with the added dual-functionality of a stomp compressor. It is entirely powered by a single 9V input and features True Bypass switching. It is also built ruggedly for repeated stage abuse. Despite it essentially featuring two pedals in one, the combined chassis is somewhat conservative in regards to the amount of pedalboard real estate it occupies. Because the compressor shares the same box, there is no need for extra patch cables, which would not only take up space but could potentially be a source of noise or signal loss in your effects chain. The two sides can also be used individually, so this is truly a dual-purpose pedal.

While TubeScreamer reissues are a dime a dozen in a crowded market, Visual Sound have cleverly packaged their interpretation together with a stomp compressor and some sensible modifications. While the overdrive circuit itself is pretty true to the original TS design, the added Bass Boost switch is a key design addition. The original TS was infamous for stripping away low frequencies when engaged, forcing the player to compensate using the EQ or tone controls on his or her amp. This of course defeats the purpose of the stomp box, because when the players switches it off to go back to a cleaner setting, their tone will be too accentuated in the lows. With the Bass Boost switch engaged on the Route 66 pedal, this tone adjustment is done for you, providing a thick, uncompromising overdrive. For me, this is the singular element that sets Visual Sound's product apart from the competition.

I found the other controls to be quite expressive and effective. The drive knob has a smooth, progressive trajectory that allows you to easily dial in the amount of overdrive from subtle to heavy. In particular, I found the tone knob in the center to be very effective, and when pushed past the 12 o'clock position it really adds to the tone. (In fact, the tone knob turned full bore was a common technique used by The Strokes using the same circuit during the recording of their first two albums). The volume control, as expected, provides clean control of the overall output to best adapt the pedal to any amplifier or signal chain.

The compressor side, which intelligently comes before the overdrive section is also very useful. While there may be many individual compressors with more in-depth controls available, the simplicity of this design with the added bonus of its integration into the same chassis without the need for supplementary patch cables renders it a valuable tool. The compressor is particularly useful when riffing in alternate tunings where there are many open and droning strings.

The one control on the compressor side that I don't use often is the Tone Control. Unlike the tone control on the overdrive side, the Tone Control for the compressor can be disengaged. This is a good thing, because also unlike the overdrive's tone control, it much more severely alters the shape of the tone. For the general tightening up of one's sound, the tone control is probably too heavy-handed and best left alone. However, this could become useful in a live scenario, where switching guitars would require changing amp settings to adjust to the change in pickups. Instead, you could dial a compensating tone adjustment using the tone knob ahead of time. Starting with the tone knob disengaged with guitar A, you could simply turn it on when switching to guitar B and save yourself the need to reach over to the amplifier's tone controls.

I'm very pleased with the sound and tone achieved with this pedal. Between the controls on both sides, there's a lot of variation in the type of overdrive tones I can dial-in. As someone who plays a lot of indie, alternative music, this pedal adequately fulfills my needs in terms of a subtle, harmonic overdrive with accompanying compressor to tighten up resonances and droning strings. In the example below, I play a riff in Open D where the compressor really helps to clarify the notes of the chords and bring out the picking dynamics induced by the overdrive circuit.

The compressor also works well on it's own to tighten up open chords and clean tones. The overdrive is also perfectly functional on its own and does not require the compressor to fill out its tone. My only complaint so far with the unit, is that when the compressor is engaged it tends to emphasize low-level noise in my signal path. This of course is an inevitable by-product of compression, but it is something to be wary of in a recording environment.

In keeping with Visual Sound's established reputation for producing quality, well-thought out products, the Route 66 delivers. It is a classic overdrive pedal that is very suited for traditional tube amps. It won't deliver scorching, Marshall half-stack distortion, but I pair it with my Rat 2 for those needs. The compressor is also a great added tool to my signal chain and the ability to have them both in the same unit greatly simplifies things.

(contenu en anglais)
Afficher la traduction automatique
Afficher l'avis original
The Visual Sound Route 66 American Overdrive is a pedal designed for electric guitar but can be used with any electronic instrument.  The pedal has standard 1/4 inch connections and requires a nine volt power supply.   The pedal isn't rack mountable as it is foot pedal.

The make up of the Visual Sound Route 66 American Overdrive isn't complex but there is a decent amount going on simply because this pedal has a lot to offer.  The pedal has sections for both overdrive and compression, with parameters for drive, tone, and volume under overdrive, and sustain, tone, and gain under compression.  The pedal also has buttons for bass boost and tone control options.  The compression and overdrive are separate as there is a button to engage each of them.  A manual isn't necessary in my opinion unless you are a beginner and are unsure of what these parameters will do.

The sound quality of the Visual Sound Route 66 American Overdrive is pretty impressive overall.  I have used the pedal with a Fender Strat and a '76 Fender Twin Reverb amp for recording and have generally been quite happy with the results.  It works great in tandem with a tube amp as it definitely has a similar type of sound even though this doesn't have an actual tube inside of it.  It has a very realistic sounding tone and isn't all digital sounding as many modern overdrive pedals are.  I also love having compression and overdrive in the same pedal as it makes for a compact unit that is also versatile in terms of tone quality.  While compression isn't top notch in terms of its sound, it will do the job most of the time and is great for those who don't need to use compression all that often.

If you're looking for a versatile overdrive pedal, I would definitely recommend the Visual Sound Route 66 American Overdrive pedal as a choice to look into.  It isn't too expensive considering you're getting both an overdrive and compression pedal in one and definitely provides a wide array of different tone.  While this isn't my favorite pedal in terms of either overdrive or compression, both are definitely very respectable and do sound quite good.  All in all the Route 66 is a great sounding that is compact, versatile and nicely priced.