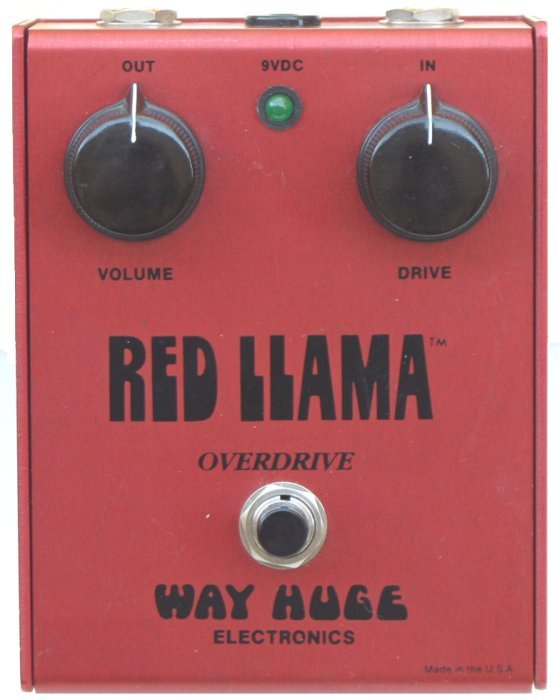 (contenu en anglais)
Afficher la traduction automatique
Afficher l'avis original
Way Huge Electronics Red Llama Overdrive is a somewhat rare overdrive pedal designed for use with electric guitar. While it is certainly suitable for use with any electronic instrument, I've only used with electric guitar. The pedal is pretty standard as far as its characteristics go, as it has 1/4" connections and a jack for a nine volt power supply. It isn't a rack mountable piece of gear as it is a stomp box.

There aren't too many pedals out there that are easier to use than the Way Huge Electronics Red Llama Overdrive. Users on all levels should be able to understand the basic make up found here as the pedal simply has parameters for volume and drive, with no other parameters to work with in the mix. There isn't too much more to say about using the pedal, except that I don't think you need a manual at all with this pedal.

The Way Huge Electronics Red Llama Overdrive has an overall really cool sound. I can't think of any pedals that I could compare it to, as the Red Llama Overdrive is literally an animal of its own. I've used the pedal with a Fender Jazzmaster and a '76 Fender Twin Reverb for a recording session, and was very pleased with the outcome. The pedal is great for giving you a subtle overdrive boost, but it can also crank as well to give you some nice fuzz. It isn't the most versatile pedal considering the small amount of parameters, but this doesn't bother me at all because the sounds that it does get are top notch.

Beyond the one that I used, the Way Huge Electronics Red Llama Overdrive pedal seems to be pretty rare. I haven't seen any others out there, and I don't personally own one. However, it was a great pedal to have around in the studio as it helped to achieve the sound I was looking for on this particular recording session. I don't really know anything about the price or anything like that, but regardless of it, this is a very cool pedal worth investigating into if you're looking for an off brand overdrive pedal.
La Way Huge Electronics Red Llama est une pédale overdrive assez rare conçu pour une utilisation avec la guitare électrique. Bien qu'il soit certainement adaptée pour une utilisation avec n'importe quel instrument de musique électronique, je l'ai utilisé uniquement avec une guitare électrique. La pédale est assez standard : connexions jack 1/4 de pouce et une prise neuf volts. Ce n'est pas du matériel à montage en rack mais une pédale.

(contenu en anglais)
Afficher la traduction automatique
Afficher l'avis original
This is a pretty basic overdrive pedal, but it has an interesting tone. There are no MIDI/computer editing capabilities. The device is made from analog technology, and its an update on vintage tones. This device has the simple 1/4" input and output connections, as well as an input for a power supply. It can also run on a 9V battery. I've only used this device with electric guitars.

This pedal is an absolute breeze to use. The simple, two-knob structure makes editing on the fly pretty easy. There are simply knobs for volume and drive (output level and gain). It's a pretty easy pedal to use, and it's easy to get good sounds as there really aren't any settings that sound bad. There's absolutely no need for a manual.

While advertised and labeled as an overdrive, I think that this pedal is actually a blend of overdrive and distortion. There's really no way that an overdrive should have the potential to be this heavy. Not that it's an overwhelmingly heavy sound, but it's a tougher sound than most overdrive boxes will give you. I'd say it's more of a mild distortion. It sounds good for lighter rock stuff, and actually has enough drive contained in it to be a great sound for leads, especially when being played over a relatively calm backing track. I wouldn't recommend it for a hard rock act, unless they need a lighter distortion for rhythms. Really rocking out, though, would require something else with more guts like a heavy fuzz or distortion.

I think that this is a rather cool device. For the folk-rock, country-rock, and blues-rock kind of guys who don't wanna get too heavy, this is a really solid choice. I'd say that more often than not, I could find some use for it in my setup. I don't know how much they usually run. I doubt you'd have to pay more than 160 or so for it, after that you'd be getting ripped off. It's totally worth that price tag as it consistently brings quality sound. I haven't had it long so I don't know how reliable it is, but since I don't really gig with it I can't say for sure.
Ceci est une pédale overdrive assez basique, mais il a un ton intéressant. Il n'ya pas de possibilités d'édition MIDI / ordinateur. Le dispositif est constitué de la technologie analogique, et sa mise à jour sur des tons vintage. Cet appareil a la simple 1 / 4 "d'entrée et de sortie, ainsi que d'une entrée pour une alimentation électrique. Il peut aussi fonctionner sur une batterie de 9V. J'ai seulement utilisé cet appareil avec des guitares électriques.