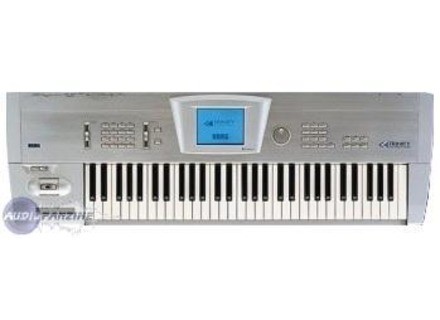 Korg Trinity Plus
3
I planned to use this one as a replacement for my studio instruments TR rack and Prophecy, mostly used for electronic music.

The built quality is very good, sturdy plastic and aluminium, very nice. Ergonomics is very advanced for the time, but still quite OK even today (2015).

When played, the keys feel quite OK, not spectacular, but really good, fast keys, Aftertouch feels a bit strange, produces a kind of an audible step between pressed and non-pressed key. It can be neutralized with a very careful programming.

It is armed with a sequencer, but I don't use it, my work is managed from my PC DAW.

The factory sounds are OK, percussion sounds are brilliant, and the rest still holds well today, this is a very playable instrument.

I already have TR rack as well as Korg Prophecy. I like both of these synths very much and I expected the Trinity Plus to replace both.

However, though it sounds good, it simply doesn't sound that good as TR rack and Prophecy. It sounds similar, but that is just not it, the sound is not so full when comparing the same presets.

In addition, Prophecy has much better keyboard feel, as well as modulation possibilities.

To resume, for the right price, it is a brilliant instrument with lot of sonic potential. However, it loses the race when compared to TR rack + Prophecy individual sounds. For a gigging musician on a budget it is a great instrument.

Korg Trinity Plus
4
Afficher la traduction automatique
Afficher l'avis original
This is a digital synthesizer, with a 32 polyphony and pitch, modulation, sustain controllers. The device is also a MIDI controller as are most digital synths. There is an incredibly wide variety of digital synths. These sounds can be updated regularly. Another cool feature of this synth is the digital touch screen. This makes navigating the machine far easier. This machine is compatible with Logic and most other DAWs. It can be updated pretty regular and the computer and touch screen can both be used to edit the effects.

This isn't a particularly simple synth to use, but like most, it can be used effectively after a lot of practice. The setup is anything but simple, as there is a lot of effects routing that needs to be done, but as far as getting it going in the first place, I don't think it's too difficult. The manuals (yes, there are about 5) will explain how to run every feature. It's actually quite a nuisance to get set up, this is the main reason why I get so easily frustrated with these things.

These sounds are definitely not my favorite types of sounds. I prefer analog, and analog replications, when it comes to synths. That being said, the sheer range of sounds available on this thing is pretty amazing, and considering how easy it is to custom edit effects, the results can be rather impressive. The machine is capable of combining about 8 mono or 4 stereo input effects, as well as adding basic overall effects like modulation and reverb. My main complaint, though, is that the reverb sounds horrible. Most digital reverbs will be less than impressive but this one is abysmal. Luckily I have other reverb options. As long as you know what sounds to avoid (there's too many to list), I think that most people could be happy with this thing if they are interested in having a versatile digital synth. But be forewarned; none of these sounds are really that great. As far as realism goes, it's not very impressive. It is, however, more touch sensitive than most digital keyboards in general, let alone synths.

I don't really like the large amount of setup that it takes to get this thing working. I'm also not crazy about how long it takes to program and sift through the keyboard finding good sounds. I think that this would be more effective in the hands of somebody who knows exactly what they are looking for in a digital synth, which I must confess I don't always. I've tried a lot of digital synths, and this is probably one of the better ones I've tried. Because of that, I'm inclined to give it a high score, because I know that for people who love these things, this is definitely one to get excited about.
C'est un synthétiseur numérique, avec une polyphonie de 32 et hauteur, la modulation, de soutenir les contrôleurs. Le dispositif est également un contrôleur MIDI comme le sont la plupart des synthés numériques. Il ya une variété incroyable gamme de synthés numériques. Ces sons peuvent être mis à jour régulièrement. Une autre fonctionnalité intéressante de ce synthé est l'écran tactile numérique. Cela rend la navigation beaucoup plus facile de la machine. Cette machine est compatible avec la logique et le plus d'autres DAW. Il peut être mis à jour très régulière et l'écran d'ordinateur et de toucher à la fois peut être utilisé pour modifier les effets.