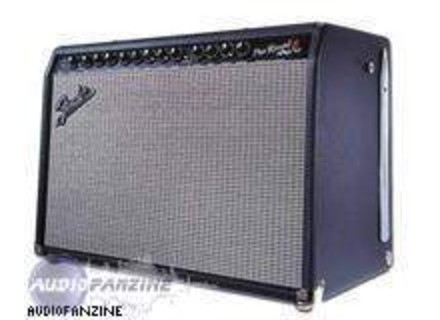 Fender Pro Reverb
4
Afficher la traduction automatique
Afficher l'avis original
The Fender Pro Reverb was introduced in the sixties as an amplifier to round out their line of amps. The Twin Reverb was the flagship for many years, and lots of players loved them, but the weight and high wattage made it a no-go for some. The Fender Pro Reverb, rated at about 40 watts but maintaining the classic 2x12 speaker configuration, was definitely a step closer. The Pro Reverb puts out 40 tube watts, has 2 12"s and has the typical blackface era layout of two channels. The first is normal and has volume, treble, and bass controls with a bright switch like a Twin Reverb. The vibrato channel has those same controls, but also contains the standard reverb and vibrato controls that are on most standard Fenders of the era.

Getting a good sound out of the Pro Reverb is certainly a simpler task than dialing in a big ol' Twin Reverb, that's for sure! Being that it's only 40 watts as opposed to 85, you're not dealing with the super high headroom that a Twin takes up in a space. However that being said, 40 tube watts is still nothing to scoff and the Pro Reverb still isn't what I would call a bedroom or basement amp... definitely something that should be gigged properly. Other than the wattage factors, it's still a great sounding clean Fender amp that does what it says and sounds great while doing it!

The tones out of this amp are pretty cool. They're more or less very Twin like in character, but I find that even considering that, the Pro Reverb also has a little bit of a sweeter tone, kinda like the Super Reverb. The Twin is quite loud and as a result is brighter to my ears. The Pro Reverb is a little more ideal for softer styles like smoother country or blues. I also enjoy hearing them with a good quality analog drive box in the front for either a little bit of casual dirt or for some full on high gain type sounds as well.