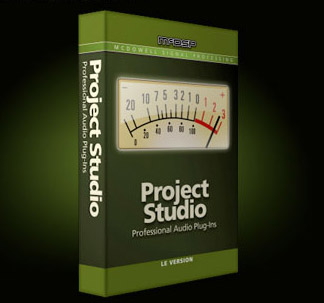 (contenu en anglais)
Afficher la traduction automatique
Afficher l'avis original
The McDSP Project Studio Bundle is a plug-in set consisting of seven plug-ins, one of which is a virtual synthesizer and one of which is amp modeler. More specifically, included in the Project Studio Bundle are the Analog Channel (analog saturation), Chrome Tone (amp modeling), CompressorBank, FilterBank, ML4000 (limiter), Revolver LE (convolution reverb), and the Synthesizer One, which is the synthesizer. This bundle is only available as RTAS plug-ins, so if you want to this in HD, you'll still need to use these as RTAS plug-ins. The LE version of this bundle has now been upgraded to Native, with the plug-ins looking a bit different. I'm not sure about the availability of these plug-ins as individuals, but this isn't the only bundle that they are in. Installing these on my system wasn't hard, but you will indeed need an iLok to authorize them. I've found these plug-ins to all be pretty easy to use, although some are more in depth than other. No manual should be necessary unless you're having trouble getting them up and running, which should be rare.

Right now I'm running the McDSP Project Studio Bundle on my system at home, but have used these plug-ins on other systems as well. My home studio consists of Pro Tools 9 and a Mac Book Pro laptop that has a 2.2 Ghz Intel Core 2 Duo processor and 4 GB of RAM. I've yet to experience any issues when it comes to performance with these plug-ins, as I have a pretty stable system. Even so, they don't seem to be taking up too much processing power.