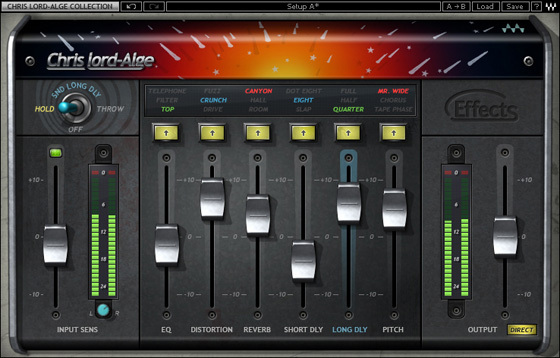 (contenu en anglais)
Afficher la traduction automatique
Afficher l'avis original
The Waves Ltd. CLA Effects is a multi-effects plug-in that comes with the CLA (Chris Lord-Alge) bundle of plug-ins. The bundle and this plug-in in particular are compatible across the board with any DAW as far as I know. I installed this plug-in on my system along with the full collection of Waves Complete plug-ins, which should be the same process (except longer) as installing the CLA bundle. Learning the interface of the plug-in isn't quite as simple as the installation process, but it's still pretty easy to follow. There are a series of sliders for controlling the different effects, which includes distortion, equalization, reverb, short and long delay, and pitch. Each has three different modes to choose from as well, further adding to the plug-ins versatility. Lastly, the plug has input and output sliders. I haven't had a look at the manual for this plug-in or any of the others int he CLA bundle as I find them all pretty easy to use.

I've currently got the Waves Ltd. CLA Effects plug-in running on my home studio's system. The system is Pro Tools LE 8 based, which I run with a Digi 002R audio interface or a Digidesign Micro Box if I'm on the go. I've got a Mac Book Pro lap top that has 4 GB of RAM and a 2.2 Ghz Intel Core 2 Duo processor, while I'm monitoring with a set of Adam A7's. I haven't tried to max out my system using this plug-in, but it's been able to handle running multiple instances of it without any issues. It's also worth noting that I've used it in Pro Tools HD a bit as well without problems.

Out of all the plug-ins in the Waves Chris Lord-Alge bundle, the CLA Effects plug-in is definitely the most versatile. The others in the bundle are specifically designed for individual instruments, but this one is useful across the board and for all applications. In general I like to use individual effects processors for mixing, but there's something to be said about being able to get all of these different sounds all in one place, as it makes for easy adjusting and experimenting. I especially like the EQ on here, which is great for getting vocal effects happening. All of the effects are realistic, and they're definitely best suited when used in tandem for blending together, as all the processors in here seem to blend quite well. If you want in depth control over your effects, use individual processors, but if you're looking to get a bunch of sounds all in one place, the CLA Effects plug-in is the perfect way to do so.
Le Waves Ltd Effets CLA est un multi-effets de plug-in qui vient avec le CLA (Chris Lord-Alge) bundle de plug-ins. Le bundle et de ce plug-in en particulier, sont compatibles à tous les niveaux avec n'importe quel DAW autant que je sache. J'ai installé ce plug-in sur mon système avec la collection complète de repousser les vagues de plug-ins, qui devrait être le même processus (sauf plus) que l'installation du bundle CLA. Apprendre l'interface du plug-in n'est pas aussi simple que le processus d'installation, mais il est encore assez facile à suivre. Il ya une série de curseurs pour contrôler les différents effets, qui comprend une distorsion, d'égalisation, reverb, delay court et long, et le tangage. Chacun a trois modes différents à choisir ainsi, ajoutant encore à la polyvalence des plug-ins. Enfin, la fiche a d'entrée et de sortie des curseurs. Je n'ai pas eu un regard sur le manuel de ce plug-in ou l'un des autres, il int CLA bundle que je les trouve tous assez facile à utiliser.

(contenu en anglais)
Afficher la traduction automatique
Afficher l'avis original
CLA Effects is part of the CLA bundle that Waves has to offer. These are plugins that were created by/for Chris Lord-Alge, the famous mixer who's done everything from Rocky IV to Slipknot. This plugin is basically an all-in-one effects solution. I like to think of it as the same as a basic multieffects unit for guitar. You have EQ, distortion, reverb, two delays and a pitch slider. It also has an input and output slider, along with different buttons up top to adjust various presets/settings. To use this, you simply enable it on your buss and start adjusting. I didn't experience any compatibility issues, so I can't comment on that. I never read the manual, but I don't think it's really necessary for these plugins. It's very easy and simple to use, so no issues there.