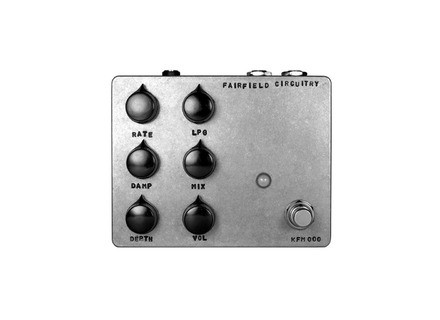 Shallow Water’s essence could be characterized as uncertain, subtle and nostalgic.
Practically, this describes an effect built around your typical analogue chorus/vibrato circuit
wherein the signal is delayed by a few dozen milliseconds using a bucket brigade device.
Another signal then modulates this delay time to create changes in pitch, called vibrato.
Chorus is achieved by mixing the original signal with the delayed signal,
creating the moving comb filters that tickle our ears and feather our bangs.
- 1/4” mono input/output jacks
- 2.1mm DC connector center negativ
- 4.7” x 3.8” enclosure dimensions

The RATE control adjusts the time intervals at which the random pitch fluctuations occur.
From rare to nervous, the range is quite wide.
At high RATE and DAMP settings, the quick variations have trouble passing through the swampy filter and integrator, effectively reducing perceived modulation. This is normal.
The interaction between these two knobs is particular and needs to be tamed through experimentation.
The DAMP control affects the slope of the modulating signal.
At its minimum,the pitch modulations are quick and sudden; the random changes in
modulation voltage are almost instantaneous.
Increasing DAMP will elongate and soften the modulation. At high DAMP settings,
the changes become so slow that they are not heard as pitch modulations.
To hear the changes, some dry mix needs to be applied. Then, the slow movement of the delaytime can be heard as chorus.
The DEPTH knob adjusts the intensity of the modulation.
The interaction between all three modulation controls is noticeable.
The range of modulation is focused towards subtle variations.
Adjust to taste, though less is more.
The LPG control adjusts the level of the envelope going to the low pass filter and gate circuit.
At lower levels the signal will be darker, choke subtle notes and reduce sustain.
At higher settings, the sound will be brighter, have more sustain and might reveal some noise produced by the bucket brigade device.
The MIX control balances between the dry and wet signal.
When it’s full wet (clockwise) the effect is like a vibrato.
Chorus-type sounds are achieved by adding some of the dry signal (counter clockwise).
The VOLUME knob controls the output volume.
PSEUDO RANDOM GENERATOR
The random quality of the modulation begins in a simple program residing on a microcontroller. Its output resembles steps of random voltages, seperated by random time intervals.
The RATE control effectively sets the overall range of these time intervals.
INTEGRATOR AND DEPTH
These random stepped voltages are processed through a filter/integrator, giving control over the slope at which the steps will reach their new values.
As DAMP is increased, the random steps become slow and sluggish, instead of sharp and abrubt.
DEPTH defines the amount of modulation that will be used to modulate the
time delay of our input signal.
There is a strong interaction between all three controls affecting modulation;
that is, RATE, DAMP and DEPTH.
ENVELOPE FOLLOWER AND RECOVERY FILTER
Once the input signal has passed through the delay line, a recovery filter and some kind of gate is necessary to remove unwanted noise generated by the bucket brigade device.
To achieve this, the input’s envelope is followed and used to modulate the frequency of a
low pass filter.
The amount of envelope is set by the LPG control, yielding bouncy, lo-fi responses to
quick and snappy gate-like behaviours.