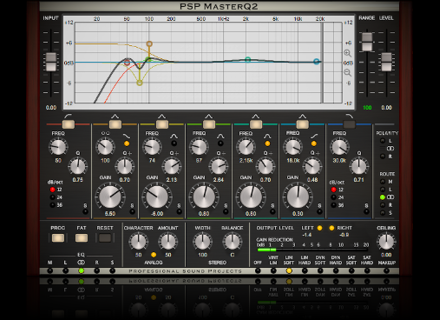 PSP Audioware MasterQ2
5
Afficher la traduction automatique
Afficher l'avis original
PSP's MasterQ plug-in is one that is available in any format and is a pretty in depth equalizer overall. No one should be having any issues as far as downloading and installing the plug-in goes, as once you've purchased the plug-in from PSP's site, you can download any version that you need. As long as you know what format you need the plug-in in, you should be all set. The interface of the MasterQ is a little more complicated than installing it, but not by all that much as it's pretty simple to follow if you know something about equalizers. The MasterQ is a seven band equalizer, with the five in middle consisting of parameters for frequency, gain, and Q (bandwidth), while the two bands on the outside act as low and high pass filters with parameters just for frequency and Q. There are a few other main parameters to work with, but nothing major that needs to be mentioned here. The most useful thing about this plug-in is that there is a detailed graph that shows all of the moves you're making. I've never had a need to check out the manual for this plug-in.

I'm no longer running the PSP MasterQ plug-in on my current Pro Tools system, although they do have an RTAS version of it. I used to run it in Cubase SX 2.0 and later on it 3 on a Hewlett Packard Pavilion dv8000 lap top that had 2 GB of RAM and a 3.0 Ghz processor. I never really maxed out a session with this plug-in on the aforementioned system, but I was able to run a few of them simultaneously without any hiccups. While it's called the MasterQ, you can definitely used it either as a mixing or mastering plug-in.