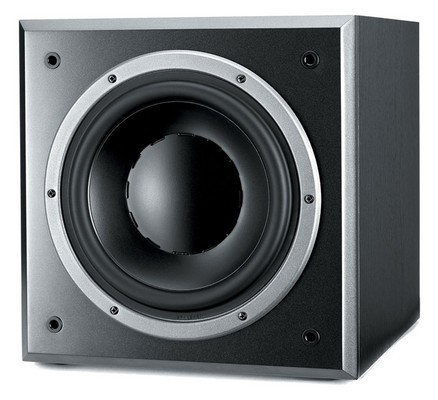 (contenu en anglais)
Afficher la traduction automatique
Afficher l'avis original
The Dynaudio Acoustics BM9S is a sub woofer that I've used with the Dynaudio BM5A studio monitors. This sub is active, so no external power amplifier is necessary. It's got a single speaker that is 10" in diameter and the whole speaker isn't too much larger than that. It's also got control in the form of both a low and high pass for tuning the monitor to your room. In general it would be pretty easy to move around because of it's size.

The Dynaudio Acoustics BM9S is really a great addition to another set of Dynaudio speakers as it gives you a whole new world of low end that would not be possible with a pair of near field monitors like the BM5A's which I've used this with. You can use these with any comparable set of studio monitors, but for best results I'd probably stick with something made by Dynaudio, and more specifically the BM5As or BM15As. While I'm a big fan of the way the BM5A's sound on their own, it's definitely a fuller sound when you add the BM9S. While I'm not sure that I'd mix with this sub woofer, as in general I don't like to mix with one, but for checking mixes with a lot of low end or for tracking, this is more than a useful tool to have. While I mostly record rock and pop music, I would imagine that this would be most useful for something who is doing electronic music or post production.

While I don't think that I'd recommend the Dynaudio Acoustics BM9S for anyone other than a professional, it's an awesome sub to have if you're after one. Again, I'd really encourage you to match this up with a pair of Dynaudio monitors, but I guess you could use it with any set of near or mid-near studio monitors. A sub isn't always necessary, but if you feel that you will need one, this is definitely one of the best that I've used, at least when paired with the BM5A. The price is also reasonable, so if you're looking for a great set of monitors and a sub woofer to go along with it, you can't go wrong with matching your BM5As with the BM9S sub woofer.
Les Dynaudio Acoustics BM9S est un caisson de grave que j'ai utilisé avec les moniteurs de studio Dynaudio BM5A. Ce sous est actif, donc pas de l'amplificateur de puissance externe est nécessaire. Il a un seul haut-parleur qui est de 10 "de diamètre et l'orateur l'ensemble n'est pas trop grand que cela. Il a également obtenu le contrôle dans le formulaire à la fois un passe-bas et haut pour le réglage du moniteur de votre chambre. En général, il serait être assez facile de se déplacer en raison de sa taille.