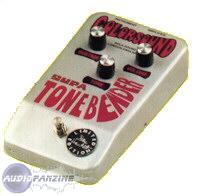 (contenu en anglais)
Afficher la traduction automatique
Afficher l'avis original
The ColorSound ToneBender is a vintage fuzz pedal that has also been reissued as a fuzz pedal in recent years. This review is for the original ToneBender however, which I believe was first made in the mid 1970's. It can be powered by a nine volt battery, which is the method that was used while I was using the pedal, and I don't remember if it also had a power supply jack. It's an analog pedal consisting of 1/4" connections and isn't rack mountable as it's a foot pedal.

Using the ColorSound ToneBender is super simple. It isn't limited even though it's only got three knobs either, as you can get a good amount of varying tones just from these three parameters, which are for sustain, tone, and volume. As anyone can see, it's a really simple make up so there's no need for the assistance of a manual.

The tone of the ColorSound ToneBender is what has given it it's reputation over the years. It's definitely a traditional sort of fuzz box with a really huge sound to say the least. It's perfect for getting that classic fuzzy distortion, but I like it a lot because it doesn't blur the notes and you can still hear the musically elements of what is being played. I've used it primarily for rhythm guitar parts, but it could be useful for lead as well in the right situation. I've only used the box with electric guitar - mostly a Fender Stratocaster and a '76 Fender Twin Reverb, so I think I'm getting a true picture of what the pedal sounds like. I could see it being useful for keys as well, but I've yet to have the chance to try.

There aren't too many ColorSound ToneBenders out there, but you can definitely still find them used if you've really got your heart set on getting one. However, be warned that it will cost you a very decent amount of money! I'm not sure it would be worth the price of a used one considering what they usually go for, but if you're a collector of vintage pedals this is certainly one to be aware of. The ToneBender sounds awesome for sure, but I wouldn't buy one myself since I don't use traditional fuzz that much and I couldn't afford this if I did! If you ever come across a vintage ToneBender, it's definitely going to be a pedal you want to hear.
La Tonebender ColorSound est une pédale Fuzz vintage qui fut également l'objet d'une réédition ces dernières années. Cet avis concerne la pédale originale, qui je crois est sortie dans le milieu des années 1970. Elle peut être alimentée par une pile de neuf volts, et je ne me souviens pas si elle a aussi la possibilité d'y brancher une alimentation secteur. C'est une pédale analogique composé de connectiques jack 1 / 4 "&nbsp; et n'est pas montable en rack.