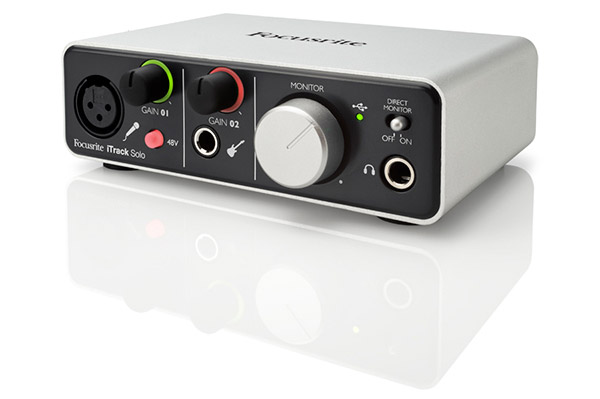 "For my Ipad""Pour mon Ipad"

(contenu en anglais)
Afficher la traduction automatique
Afficher l'avis original
I purchased the iTrack Solo recently for use with my iPad. Not that I record very often with my iPad but sometimes depending on where I am I like to use it. I was looking for an inexpensive interface that I could use with it because I knew that I would not be using it that much so I wanted something simple. I did some research and came across the iTrack Solo. This is probably as simple as you can get when it comes to interfaces. You can use this with a Mac/iPad and even PC computers. It is very easy to set up and start using. It is a two channel interface that has a decen preamp and comes with phantom power.

I only use this most of the time just to record guitar tracks on the go, I keep it in my bag so that where I am I can pull it out and lay down some guitar tracks and ideas on the go, I love how it works great with my iPad because I always have my iPad with me so I can always record something no matter what.

The preamp is very quiet, it generates no noise but it is not good enough to give you anything above average recording quality. I would not use this to record anything serious or anything more than just some ideas and practicing. I would not try to add anything that I recorded with the iTrack solo to a final mix because the preamps are not good enough (at least for my standards).

(contenu en anglais)
Afficher la traduction automatique
Afficher l'avis original
The Focusrite iTrack Solo is a standard 2 in and 2 out audio interface that has 1 microphone input. It can be used on your Mac or PC , it only cost around 150 dollars. The iTrack Solo is very portable, that is what Focusrite was going for when they made this interface, they wanted to create something solid but still portable enough to take with the mobile musician.

It is a 2 channel audio interface, with a solid preamp that has phantom power to give you some solid and clean direct recordings. The iTrack Solo is built well and will last you a long time if you take care of it. You can get up to 24 bit/96kHz resolution using it with your home set up which is not bad for an interface that is this inexpensive. It has a direct input for your guitar as well to make it very easy to record directly into your computer or DAW hassle free. No matter where I have used this interface, on a PC, Macbook and even my iPad, I am always able to knock out some really clean recordings that will sound like they came from a more expensive interface when in fact they come from this iTrack Solo.

The drivers are very stable on the iTrack Solo and I mostly used it with GarageBand on my Macbook or iPad. I have only recorded one track at a time with this interface, and I have not received any driver updates yet. Maybe they have released some on a Windows computer though.