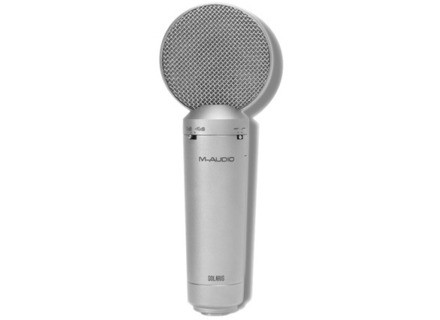 M-Audio Solaris
Afficher la traduction automatique
Afficher l'avis original
The M-Audio Solaris is a large diaphragm condenser microphone that is designed for use in the recording studio.  The mic has a high pass filter as well as a pad that has switches on the microphone itself.  It has an interesting and unique including a circle that encloses the capsule.

I've been using the M-Audio Solaris for about a year or so and have found it to be a pretty good condenser microphone.  I usually don't trust the microphones made by M-Audio as I find that most of the time they aren't made at as high of a quality as other microphones out there that I use, but the Solaris turns out to be an exception.  The shape of the mic makes it a good choice for vocals as the circular shape makes it perfect for picking up sounds from the mouth of any type of singer.  The sound quality is pretty clear and I find that I'm always pretty happy with the results I get coming from this microphone.  In addition to using this microphone as a vocal mic, it works well for a variety of other applications including as a room mic for electric guitar, and as a close up mic for acoustic guitar and other acoustic instruments.  The price of the M-Audio Solaris isn't all that cheap as is the case with most M-Audio mics, but it is pretty cheap when compared to some other mics of this caliber out there.  While I don't think that this microphone is suitable for professionals as I don't think the sound quality is up to par, this is a pefect microphone for home studio owners.  If you are looking for a good sounding microphone at a cheap price, the M-Audio Solaris is as good of a mic in this price range as you can find.