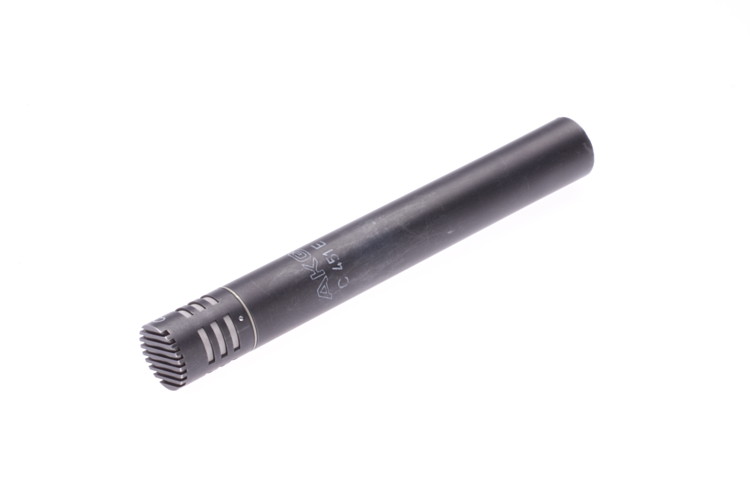 (contenu en anglais)
Afficher la traduction automatique
Afficher l'avis original
This is the AKG C451, a small diaphragm condenser microphone. I have used it mostly in the studio, but I have played gigs where the sound engineer has used them as my drummer's overhead mics, so they can be used in live situations as well. However, they are fragile like most condensers, so I would handle with care at all times, especially outside the studio. They are a quality microphone, like almost all the AKG products that I have used.

The predominant usage of these mics for me is as drum overheads. I tend to prefer these to almost any drum overheads as they give a crisp, full sound to the overall kit. I like the fact that they get a decent amount of snare and kick sound in them, but that tends to not get in the way of the cymbals. I have had that problem with many condensers that are in the price range of these guys. I think that is what sets them apart; they don't have the GREATEST sound, but it's good enough for me (and also most of the engineers I've worked with, some of whom have far more expensive alternatives in their possession).
Beyond overheads, I have had some real success with them on string quarters, string soloists, pianos (usually in tandem with another mic or two), and other mics. They do a solid job with most of these, too, though they aren't my favorite. Part of this is because of low end, mainly, that they don't always provide enough low end response. However, when used with a mic that does have a good low end response they can give a detailed high end response that is stellar. Overall, these are a cheap, useful mic that are definitely a solid investment.
C'est le C451 AKG, un microphone à condensateur à petit diaphragme. Je l'ai utilisé principalement dans le studio, mais j'ai joué concerts où l'ingénieur du son a les utiliser comme des micros-dessus mon batteur, donc ils peuvent être utilisés dans des situations de vivre ainsi. Toutefois, elles sont fragiles comme la plupart des condenseurs, donc je manipuler avec soin, en tout temps, surtout à l'extérieur du studio. Ils sont d'un microphone de qualité, comme presque tous les produits AKG que j'ai utilisé.