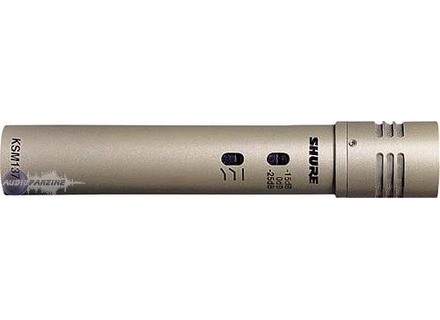 Shure KSM137
5
Afficher la traduction automatique
Afficher l'avis original
The Shure KSM137 is a small diaphragm condenser that is made for using in a recording studio setting. This is a newer Shure mic, but I only used it for the first time recently. It's a cardioid microphone and has a 20 Hz to 20 kHz frequency response, which is of course the full range of human hearing. It's got a pad that has either -15 db or - 25 db of attenuation and also has a low cut option for both 80 Hz and 115 Hz. It's the perfect condenser for a variety of applications.

The Shure KSM137 is a nice choice for a pretty inexpensive small diaphragm condenser mic. It's not the most versatile or most brilliant sounding microphone, but will definitely work well for a variety of situations and doesn't cost very much money. I've used it for recording the bottom of a snare drum and on acoustic guitar thus far, but it's going to sound just fine in a home studio setting for just about anything where a small diaphragm condenser would be relevant. It's probably not a pro mic when it comes to acoustic guitar and other acoustic instruments like that, but it's perfect for something like snare bottom where you don't necessarily need it to pick up such a large range as you would with acoustic guitar. Still, the Shure KSM137 is perfect for the home studio owner who wants a nice sounding and inexpensive small diaphragm condenser. In a pro setting it'll be more limited, but is still a solid mic. Of course it's got the Shure name attached with it so you can rely on their reputation when you think about longevity and stability, which has been the trademark of Shure for many years. Definitely get into looking at the KSM137 if you want a small diaphragm condenser for cheap without sacrificing too much quality.
Le KSM137 Shure est un condensateur à petit diaphragme qui est faite pour l'utilisation dans un studio d'enregistrement. Ceci est un micro Shure nouvelles, mais je ne l'ai utilisé pour la première fois récemment. C'est un micro cardioïde et a une réponse de 20 Hz à 20 kHz de fréquence, ce qui est bien sûr toute la gamme de l'audition humaine. Il a un pad qui a soit -15 dB ou - 25 dB d'atténuation et a également une option coupe-bas à la fois pour 80 Hz et 115 Hz. C'est le condenseur idéal pour une variété d'applications.

Shure KSM137
4
Afficher la traduction automatique
Afficher l'avis original
This is the middle of the road model in Shure's KSM line of small diaphragm microphones meant for the studio. Overall I will say that this mic sounds very good. Since it's a small diaphragm, it does great with peaks and transients. Anything you record with this mic is at the very least going to sound very crisp and present. Also the higher frequencies come through very well on this mic. Unfortunately so do the upper mids however, which can at times give this mic a little bit of a harsh sound which seems to never happen with this mics more expensive older brother, the KSM 141. It also has a couple of nice features like the switchable attenuation pad. This pad has 3 levels, which can be set to 0, 15 dB of attenuation, or 25dB of attenuation. Between those pads you should really be able to record just about anything without worrying about distorting the signal into your mic. There is also a switchable low pass filter which the less expensive KSM 109 lacks. It actually has 3 positions being neutral, a steep high pass filter that sounds like it starts around 60 Hz, and a much more gradual low roll off that sounds like it starts around 120 Hz. You're going to need a preamp with phantom power to use this mic.