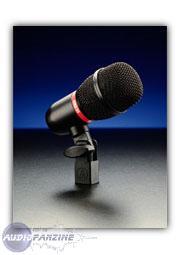 (contenu en anglais)
Afficher la traduction automatique
Afficher l'avis original
The Audio-Technica Pro 25 is a dynamic microphone that I've got experience using in the recording studio, but it seems like it would work well for live shows as well, but I don't do any live sound so I can't say so from experience here. The mic has a hyper cardioid pick up pattern, so it's best to point it directly at your signal and up close. The mic is labeled as a drum mic, and that's the experience that I've got with it as well.

My experience with the Audio-Technica Pro 25 is in the recording studio to record tom tom drums for the most part. I've also tired it on kick drum, but determined that I liked the mic best for tom tom drums. I'm sure that it would work well for other drums as well, and it wasn't all that bad on kick drum either - I just prefer something with a bit more roundness to it. The last application that I've tried the Pro 25 for is for a bass guitar cabinet, which also worked well. The mic is overall pretty versatile, and since it is so small, it's incredibly easy to fit in tight places if you need to. I haven't used it on snare drum, but I would definitely not be reluctant to try it next time on the bottom of a snare, as I generally don't mess with the standard formula of using a Shure SM57 on top. In fact, it would be quite easy to place this on the bottom of a snare due to it's extremely small size. The mic overall doesn't have the biggest sound, but I still wouldn't be surprised to find that it sounded good for a variety of applications that I haven't used it for as well. While this wouldn't be the first mic that I would go to for any one application, it's definitely a useful mic and I couldn't argue with anyone for using it for a variety of applications.
L'Audio-Technica Pro 25 est un microphone dynamique que je dois utiliser l'expérience en studio d'enregistrement, mais il semble que ce serait bien travailler pour des spectacles vivants ainsi, mais je ne fais pas de son en direct donc je ne peux dire de l'expérience ici. Le micro a un pick hyper cardioïde jusqu'à motif, il est donc préférable de le pointer directement à votre signal et de près. Le micro est étiqueté comme un micro tambour, et c'est l'expérience que j'ai avec elle aussi.