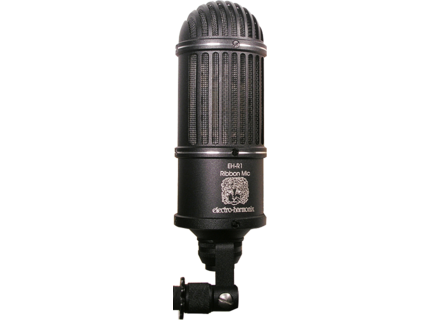 Electro-Harmonix EH-R1 Ribbon Mic
4
Afficher la traduction automatique
Afficher l'avis original
The Electro-Harmonix EH-R1 is a ribbon microphone that is to be used only in the recording studio. As is the deal with all ribbon microphones, the EH-R1 is pretty fragile and shouldn't be handled without care or brought outside of the studio unless necessary. It has an old school sort of look to it, which is definitley pretty cool. The mic has a frequency range of 50 Hz to 16 kHz and a figure eight pick up pattern. It comes with a clip and a hard shell case for the mic, but the shock mount is sold separately, which I have not used with the EH-R1.

The Electro-Harmonix EH-R1 definitely comes from an unlikely source, as Electro-Harmonix doesn't make too many microphones, let alone ribbon mics. I've used the EH-R1 at a studio where I've done some freelance work, so I don't own the microphone myself. I haven't used the EH-R1 as extensively as I would like, but I have used it for recording acoustic guitar and a vocal. It's a really warm sounding microphone for the most part, although it does lack the clarity that you'd get with a higher quality condenser microphone. I liked it better for the vocal, as it didn't cover enough of the high end sparkle that I like for acoustic instrument. In the last couple of years there have been a lot of inexpensive ribbon microphones to come out, and this is one of the better ones that I've tried. I'm not sure that I'd buy it for myself, but for the price there isn't much risk involved at all. Don't be fooled by EH making something that might be out of their element a bit, as the EH-R1 is a very nice ribbon microphone for the price and definitely worth looking into if you're shooting out inexpensive ribbon mics.
L'Electro-Harmonix EH-R1 est un microphone à ruban qui doit être utilisé uniquement dans le studio d'enregistrement. Comme c'est le traiter de tous les micros à ruban, le EH-R1 est assez fragile et ne doit pas être manipulé sans soin ou apporté en dehors du studio, sauf si nécessaire. Il a une sorte de look vieille école à elle, qui est definitley assez cool. Le micro a une gamme de fréquence de 50 Hz à 16 kHz et un huit ramasser motif. Il est livré avec un clip et un étui rigide pour le micro, mais le montage est vendu séparément de choc, dont je n'ai pas utilisé avec l'EH-R1.

Electro-Harmonix EH-R1 Ribbon Mic
4
Afficher la traduction automatique
Afficher l'avis original
The Electro Harmonix EH-R1 is a very good mic, at first glance I didn’t like the look of it. But after it sits around in your studio it wont look that bad. On vocals AT conveyed an airy, "breathy" and roomy sound with almost zero proximity effect recording a male basso profundo-type voice performing vocal arias from Bach. Despite the vocal's bass range, proximity was not at all apparent, it seems, due to the different radiation patterns of guitar vs voice.
Harmonix EH-R1 produced pretty much the same picture here as with guitar: sweet, overly mellow, non-edgy, a kind of 60's vacuum tube sound that might have done well for a jazz recording, but then again, this is not what I was recording. AT made the vocal just a tiny bit brighter than in reality due to the +3db presence peak at 10kHz, but remained essentially faithful to the original.
In conclusion, I was forced to make the conclusion that apparently AT is intended as an all-around mic, not coloring its sound input and reproducing very beautiful transients. By contrast, Harmonix EH-R1 came out as a strong "character mic" with its own personality which at times was not at all suitable for the kind of music I was recording. Other things notwithstanding, it did awful on flamenco guitar and hand claps but seemed more suited for classical guitar and certain vocals.

Can't miss with this one. There are better mics out there, but with the right mic pre, this mic sounds good enough to deliver professional results. I'm giving it a four. Could have a bit more character, but than again, that is something you can add later on in the mix. Price is mid range when it comes to mics. If it was a little less expensive I think more people would know about this mic.