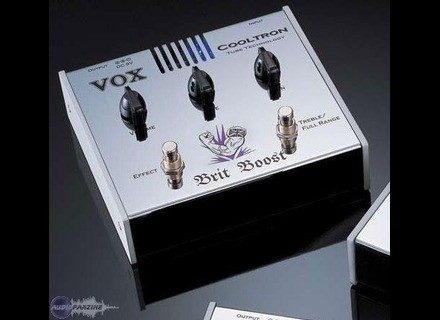 Vox Brit Boost
5
Afficher la traduction automatique
Afficher l'avis original
Vox's Brit Boost pedal is both a treble and full range booster/overdrive pedal that is designed for use with electric guitar. Hence the name, this is supposed to emulate that vintage British sort of drive sound. The pedal has pretty standard characteristics in the fact that is requires power from a 9 volt power supply and has 1/4" connections for input and output. The pedal isn't rack mountable in any form.

There isn't anything strange about the make up of the Vox Brit Boost, making it extremely easy to use no matter what sort of level you're on when it comes to pedals. The main parameters that it has to work with are for volume, tone, and gain, which are ubiquitous parameters for drive and boosting pedals. The Brit Boost also has foot switches for engaging the effect and for choosing between using the pedal as either a treble booster or as a full range booster, the latter of which is essentially using the pedal as an overdrive pedal. A manual won't be necessary unless you're having some sort of technical issue.

What's not to like about the sound of the Vox Brit Boost? It really has it all as it is very flexible in what it can do. You can use the pedal subtly as a treble booster or use it has a full on overdrive pedal as well. I've used the pedal on a recording session where I was the engineer and not the player. The guitarist was using the pedal along with a few other effects, with a Gibson Les Paul Studio and the studio's standard '65 Fender Deluxe Reverb. He was using it as both a treble booster and an overdrive, but for the most part it was being used in full on drive mode. The pedal has true bypass, which is awesome especially in the studio as it won't kill any tone or give any unwanted buzz.

While this isn't the cheapest booster/drive pedal on the market, those interested need to keep in mind that you're getting a whole more with the Vox Brit Boost. It isn't your typical overdrive or treble booster, as it's got the ability to be both in one. I'd only recommend the pedal for experienced players who are willing to spend a bit more for high quality gear, but those who anti up the extra dough will sure be happy that they did in the long run...
Vox Brit Boost pédale est à la fois une gamme complète des aigus et booster / overdrive pédale qui est conçu pour une utilisation avec la guitare électrique. D'où le nom, cela est censé émuler ce genre de sons Vintage British lecteur. La pédale a des caractéristiques assez standard dans le fait que c'est nécessite une alimentation à partir d'un bloc d'alimentation 9 volts et a 1 / 4 "connexions d'entrée et de sortie. La pédale n'est pas montable en rack sous aucune forme.