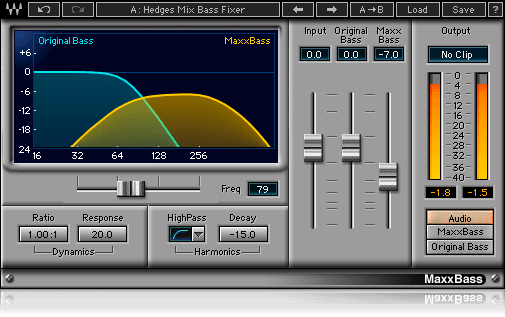 got no affiliation with waves ....

(contenu en anglais)
Afficher la traduction automatique
Afficher l'avis original
Getting Waves MaxxBass up and running was, as with all of the other Waves plug-ins I've used, a piece of cake. There were no compatibility issues and, although I didn't read the manual I can definitely say it's a fairly easy VST to get the hang of. The interface consists of a cut-off frequency fader, an input bass, original bass, and maxx bass fader, and parameters that affect the dynamics and harmonics of the signal. All in all a pretty straight-forward, easy to use plug-in.

Again, as with all of the other Waves plug-ins I've had the pleasure of using, MaxxBass has been a completely stable, reliable addition to my VST library. I'm using a MacBook Pro with a 2.7 Ghz Intel Core i7 processor and 4GBs of RAM and so far everything has been working like a charm. Of course I don't really automate functions on MaxxBass, which may put more stress on my DAW's CPU usage, so I'm not entirely sure how it performs under more strenuous circumstances. I can say, however, that as a sound shaper for some really punchy, fat bass, this is one of my favorites. It really adds a level to your bass that you can feel, sort of like a 32 or 64 ft. organ pipe would. I have successfully employed its effects in Hip-Hop, DubStep, and House tracks and it has done the job well in each scenario. I've only had this plug-in for a couple months, but I feel like it will be a prominent player in my arsenal for a little while.

(contenu en anglais)
Afficher la traduction automatique
Afficher l'avis original
The Waves Ltd. Maxx Bass plug-in is a bass enhancer designed for uses of all types, including for film and post production. I’ve only used the plug-in for musical purposes however, so that’s what I’ll be focusing on here in this review. I believe you can purchase this one individually, but I got it along with the full collection of Waves plug-ins. I know it’s available in most of the major Waves plug-in bundles as well. Using the plug-in isn’t too difficult, although it’s not as simple as the Renaissance Bass plug-in which is basically a simpler version of this. For starters, you have control over the frequency you’d like to go up, as well as a built in dynamics processor with control for ratio and response. It then has a high pass for controlling the harmonics which also has a decay parameter. There are then sliders for controlling the level of the original bass, the input level, and the maxxbass level. The plug-in will show you when you’re clipping as well as the overall output level you’re sending. It definitely shares the same kind of user friendly interface you’re going to get with most of the Waves plug-ins, while still maintaining a great deal of control here. I have no need to look at the manual for this one, but check it out if you feel lost at all.

I’m running the Waves Ltd. Maxx Bass plug-in on my system at home but since I do a good amount of going back and forth between my home studio and the professional studio that I work at, I’ve used it on a few different systems. However, I’m mostly using it at home with Pro Tools 9 and a Mac Book Pro lap top that has a 2.2 Ghz Intel Core 2 Duo processor and 4 GB of RAM. The plug-in doesn’t seem like it’s taking up much of my processing power, although I’ve never really had a need to run more than two or three instances at a time.