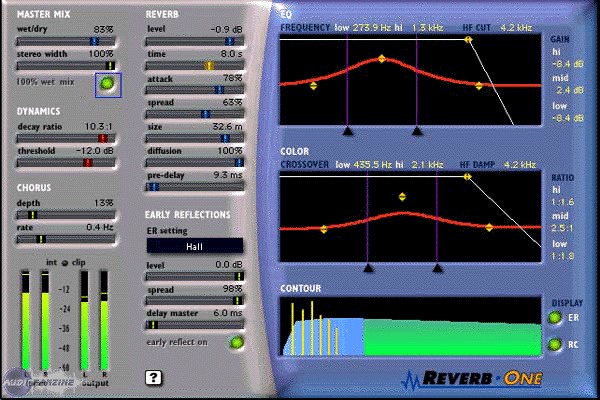 (contenu en anglais)
Afficher la traduction automatique
Afficher l'avis original
I didn't have any problems of any type while installing Digidesign's Reverb One.  The whole process didn't take long as the steps were the same that are seen while installing most plug-ins.  There weren't any compatibility issues between this plug-in and my system and the interface of the software is also easy to understand.  The plug-in has a slew of sections including ones for master mix, chorus, dynamics, reverb, and early reflections.  Of course the reverb section is the most in depth and has the most parameters.  The plug-in also has metering for EQ, color, and contour.  I haven't seen the manual for this plug-in so I can't say if it would be of help or not to have it around.

While the Digidesign Reverb One plug-in will take up some processing power, I've never had a problem running it on my system at all.  I run the plug-in on a Mac Book Pro that has a 2.2 Ghz Intel Core 2 Duo processor and 4 GB of RAM and run the plug-in in Pro Tools LE 7.4 that runs with a Digi 002R audio interface.  Being that I am able to run this plug-in pretty well on a Pro Tools LE system, I can't imagine that most will have trouble running it.

I've been using Digidesign's Reverb One for a few years and while it isn't my number one reverb plug-in, I do like the way it sounds and what it has to offer.  I like that it has sections beyond for only reverb as it makes the plug-in extremely versatile and makes it useful in a number of different situation.  The sound quality is very good overall, but my only complaint is that sometimes it sounds too digital and stale for my taste - I could use a bit more warmth.  The price of the plug-in is probably a bit too much in my opinion, but if you are looking for a versatile reverb plug-in, Reverb One should definitely be in the conversation.