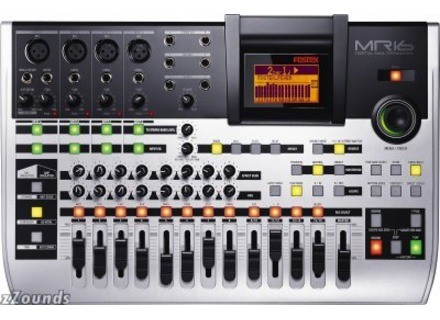 Fostex MR-16 HD
4
Afficher la traduction automatique
Afficher l'avis original
It is a 16-track recorder which comes with 8 tracks for recording and 4 stereo tracks for bouncing. There are four XLR/1/4in inputs which is usually more than enough to record something. The only time I ever felt like I needed more was for recording drums when I wanted around 8 tracks. However, recording drums with only 4 channels worked out great and sounded amazing. The 471 minutes of recording time can actually run out faster than you would think, but it is enough time to record plenty of songs. I would suggest backing up your data on a computer and then periodically deleting finished projects.

The MR-16HD was the first digital multi-tracker that I had bought, so I was eager to jump into the features and see what it was made of. Unfortunately, I had no idea what I was doing, so I had to dig into the manual. I was in luck, because the user's manual is more like a complete walk-through with examples from start to finish of a recording project. It didn't take more than a week before I was pretty much a pro at the multi-tracking.

This recorder comes with 4 delay/reverb type effects (Room, Hall, Plate and Delay). Each one sounds different and can be sent to channels 1-8. These come in handy whenever you are bouncing tracks. Another cool feature for bouncing tracks is the mastering effects. There are three different mastering effects, powerful, natural, and bright. The powerful and bright are the most noticeable. The powerful is best for rock, adding more bass and overall thickness, while the bright would be great for acoustic music.

I have been using the MR-16HD for over a year and have only had one major problem. The hard drive somehow was damaged, but Fostex customer service handled it very professionally. They replaced the hard drive under the one year warranty it came with and sent it back good as new. I have recorded many band projects with this and, besides the hard drive problem, have no complaints. Recently I have upgraded, so now I only use this unit for recording at other locations besides my home, so in durability I would say that it passes that test. I bought it new for $399.95 and I say it was way worth the price. In fact, I'm pretty sure I have made that money back just in recording other bands. Browsing the menu is ridiculously easy. Pushing the menu button in is like an enter key and turning it is scrolling. This makes it really easy to make fast changes.
Il est un enregistreur 16 pistes qui vient avec 8 pistes pour l'enregistrement et 4 pistes stéréo pour rebondir. Il ya quatre entrées XLR/1/4in qui est généralement plus que suffisant pour enregistrer quelque chose. La seule fois où j'ai senti comme j'avais besoin de plus pour la batterie a été l'enregistrement quand je voulais autour de 8 pistes. Toutefois, les tambours d'enregistrement avec seulement 4 canaux était parfait et sonnait incroyable. Les 471 minutes de temps d'enregistrement peut effectivement courir plus vite que vous pourriez penser, mais il ya suffisamment de temps pour enregistrer de nombreuses chansons. Je suggère de sauvegarder vos données sur un ordinateur, puis périodiquement supprimer des projets finis.