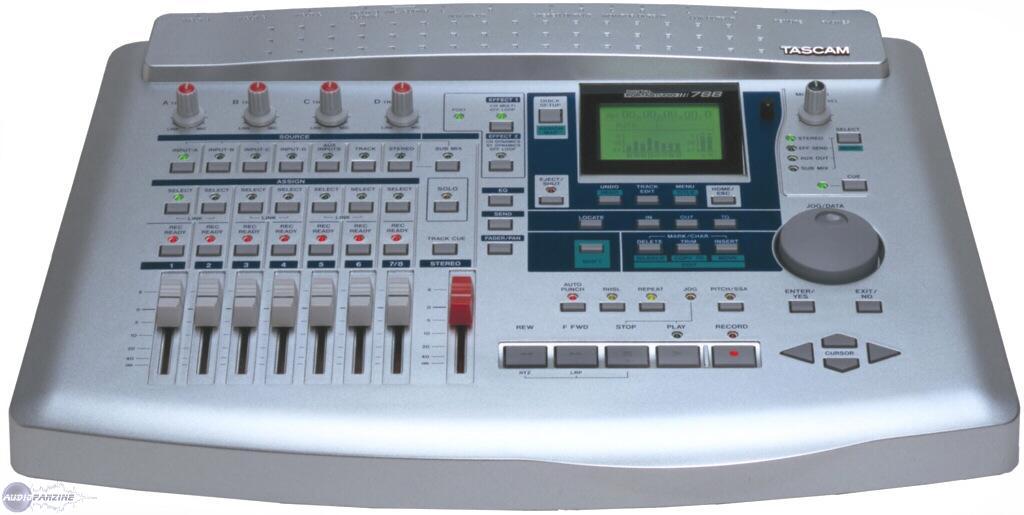 (contenu en anglais)
Afficher la traduction automatique
Afficher l'avis original
The 788 can record on up to six tracks simultaneously to eight tracks (or to an immense number of virtual tracks) at 24 bit, 44.1 kHz. It supports both MTC in and out, which is a feature not found on later Tascam eight multitrack recorders. On the latest OS, which can be purchased as a chip from Tascam for around $30, it can both import and export in the .wav format via an external SCSI CD-R drive. My $109 purchase price included an external SCSI drive. It has four mic/line level inputs, which are through 1/4". The lack of XLR inputs is a pain, but this is kind of expected for a budget oriented machine, even if it wasn't a budget machine when it was new. It also has two RCA auxiliary inputs that can be recorded on. There are a lot of available effects, but only two different channels of effects can be used. However, multiple effects (compression, delay, reverb) can be strung together as one main effect.

The manual clearly outlines the functions of the machine. Recording on this machine is a breeze, the only thing that makes it a little difficult is working with the EQ, since there aren't real knobs and this has to be changed via menus. By modern standards, burning CD-R's is slow, but bearable.

The sound quality is excellent for a Portastudio. The only difficulty is running EQ and effects, since these are all menu-driven. However, for an experienced recordist who has worked with "real" EQ and effects, it's not too difficult to figure out, but I could imagine that for a first time recordist it might be a little difficult to understand and envision what he or she is trying to accomplish within the menus.

This machine has stood the test of time for a DAW, being limited only in its slow, separate CD burner and relatively small hard drive. However, for a cheap project/vacation studio, this is an excellent machine, especially if you can get it for under $150 with the CD burner. Upgrading the OS to the latest version is a great option in order to mix down tracks on a separate DAW.