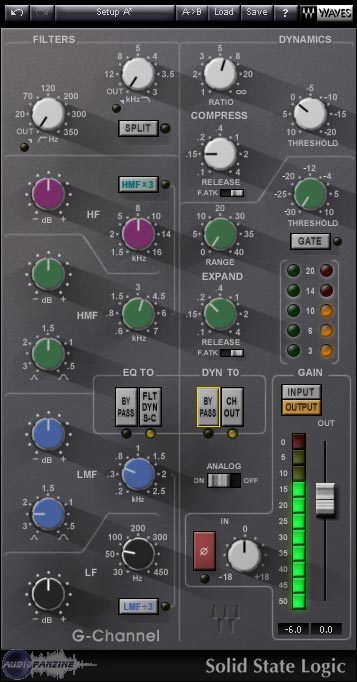 (contenu en anglais)
Afficher la traduction automatique
Afficher l'avis original
The Waves Ltd. G-Channel is a channel strip plug-in that is available within the Waves SSL 4000 bundle. It's a new addition to the bundle, although I'm not sure if it can be purchased individually. I don't own the plug-in myself, as the studio that I work at has the whole bundle, so I can't say anything about the process of installing this plug-in. The interface of the plug-in definitely has a lot going on, but it's really just giving you options. There are two main sections for both dynamics and filter, with the EQ consisting of four bands in addition to a high and low pass filter. There is also a fader and some general parameters that you would expect to find within the confines of a channel strip plug-in. I haven't seen the manual for the Waves Ltd. G-Channel plug-in, so I can't speak to it's worth.

The studio has the Waves Ltd. G-Channel and the entire SSL 4000 series of plug-ins running on a Pro Tools HD system. We have a pretty powerful computer, although I can't remember the exact specs on it off the top of my head and in an HD system you're not using the computer's processing power anyway. I can't say how well this would run on an LE system or something comparable, but it is a bulky plug-in and I would imagine that it would take up a at least a decent amount of power...

(contenu en anglais)
Afficher la traduction automatique
Afficher l'avis original
Waves has already done the E-Channel, so what better one to do than add another one? This time, they're doing the SSL G-Channel. This is part of the extremely famous SSL 4000 collection that mimics the Solid State Logic SL 4000 console series all in plugin form. That means you don't need a huge room full of consoles. Instead, you can just load up one of these plugins and go for it. This has the EQ and dynamics/compressor control all in one convenient unit. The hardware allows for some real heavy manipulation of the overall frequency band, and that's one of the biggest selling points of the SSL series. On top of that, they're crazy musical. I find myself using this often.

Waves plugins are some of the best out there, bar none. For one, they're cross platform. For a Mac user, that means the world. I'm always trying to support companies that support Mac, and Waves has been pretty good about that since the whole Intel switch. I've used these in Logic without any problems. Although they're 32 bit plugins, Logic will add a bridge to allow you to use them in a 64 bit environment as to not limit you to the amount of ram you can utilize. On top of that, these things are rock solid. I've never had a crash with Waves plugins at all.