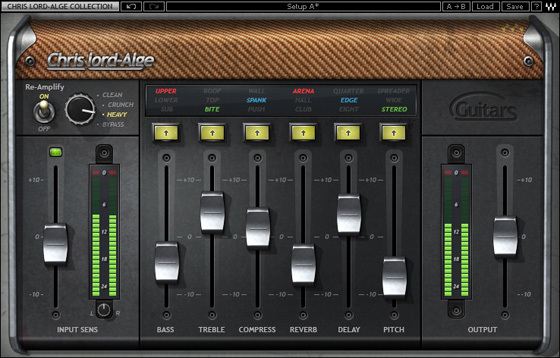 (contenu en anglais)
Afficher la traduction automatique
Afficher l'avis original
The CLA Guitars plug-in is designed to process recorded guitar tracks inside a DAW. Waves installation is simple. Once you get the program up and running, it is simple to figure out the controls of the software.

The basic processing functions are all available with this plug-in (eq, compressor, reverb, delay, chorus). The dial that selects the 'drive' adds a predefined eq curve based on CLA's preference. 'Bypass' seems to have a flat eq curve. If you turn 'Re-amplify' to 'On', the plug-in adds amplifier simulation processing. When this is selected, the dial that selects the 'drive' changes between different amp sims that have different amounts of distortion.

Obviously the plug-in was intended to be used for guitar, although you could use the reverb or compressor for other instruments.

Compared to other amp simulator software (Guitar Rig 5, Amplitube, Pro Farm 2, Eleven, Waves GTR), the amp simulation in CLA Guitars sounds equally realistic. The disadvantage is this software is you can't control any settings of the amp sim like overdrive for each amp. You really just have a choice between low-, mid-, and high-gain. Where this software excels compared to the previously mentioned amp sim software is the post effects after the amp sim. In my opinion, the other software focus on the amp sim and the other effects are just an after-thought. The secret to a professional sounding guitar track is both a good amp sound, but also a lot of post-processing.

I would assume that the eq curves in CLA Guitars are specifically chosen with the corresponding amp sim. For this reason, I don't mind the fact that the plug-in doesn't give me the options to change a lot of detailed eq settings like frequency, bandwidth, etc. The compressors are not subtle and add a lot to the guitar sound.

I rarely use the reverb in any of the CLA Signature plug-ins. However, I still think they sound good. My preference is to have a reverb bus track that I send all the instruments to.

Some people won't like that there aren't more controls for tweaking. Honestly though, I have plenty of other plug-ins if I want to tweak. I don't really need another one to do the same thing. What I like about this plug-in is that I can throw it on a track and it makes things sound better.

Generally I will use other amp sims instead of the 're-amp' feature of this plug-in. I have a POD HD 500 for amp sims. But, I will always throw this plug-in for post processing. Compared to the other Signature Guitar plug-ins (Kramer, Maserati, JJP), this one is the most dramatic and the most rock 'n roll.
Le CLA Guitars plug-in est conçu pour traiter les pistes de guitare enregistrées dans un DAW. L'installation Waves est simple. Une fois que vous obtenez le programme mis en place, il est simple de comprendre les commandes du logiciel.

(contenu en anglais)
Afficher la traduction automatique
Afficher l'avis original
CLA Guitars is part of the CLA bundle that Waves has to offer. These are plugins that were created by/for Chris Lord-Alge, the famous mixer who's done everything from Rocky IV to Slipknot. The Waves CLA Guitars plugin is basically an easy to use mastering utility for your guitars. It has sliders for adjusting bass, treble, pitch, reverb, delay, input, and output. There are also some small buttons up top to adjust different things, as well as a knob to adjust what kind of guitars you're mixing. To use this, you simply enable it on your guitar buss and start adjusting. I didn't experience any compatibility issues, so I can't comment on that. I never read the manual, but I don't think it's really necessary for these plugins. It's very easy and simple to use, so no issues there.