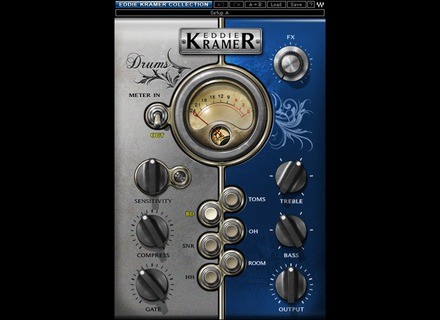 Waves Eddie Kramer Drum Channel
5
Afficher la traduction automatique
Afficher l'avis original
The Waves Ltd. Eddie Kramer Drum Channel is a plug-in that is found in the Eddie Kramer bundle of plug-ins. For those who don't know, Eddie Kramer is one of, if not the most legendary audio engineer of all time, having worked with Jimi Hendrix, Led Zepplin, and The Beatles. This bundle of plug-ins is designed by Kramer and Waves in tandem, although I don't know exactly what Eddie's involvement was beyond giving his name and using the plug-ins. I didn't have any issues installing this plug-in, as I did so along with the full Waves Complete bundle of plug-ins. The Eddie Kramer Collection of plug-ins all share a similar interface, and this one in particular I find easy enough to use. It's got a series of parameters for compression level, a gate, treble and bass EQ's, sensitivity, FX, and output. It also has a series of buttons for making or choosing presets for individual drums like bass, snare, etc. I haven't seen the manual for this plug-in, so I can't speak to it's make up.

I'm currently running the Waves Ltd. Eddie Kramer Drum Channel and the full Eddie Kramer Collection of plug-ins in my home studio. I'm running everything in Pro Tools LE 8 with a Mac Book Pro lap top that has 4 GB of RAM and a 2.2 Ghz Intel Core 2 Duo processor. I run Pro Tools with a Digi 002R audio interface and I listen with a set of Adam A7 monitors. I can't say that I've had an issue running this plug-in at all, although I should say that I'll usually use this on a drum bus auxiliary channel.

Waves Eddie Kramer Drum Channel
4
Afficher la traduction automatique
Afficher l'avis original
Eddie Kramer is one of the world's most famous music engineers and producers. He's worked with everyone from Kiss to Hendrix and everyone in between. Waves has been working in conjunction with a lot of these famous producers to create plugins, so it's no wonder that this was created. The plugin takes an EQ/compressor approach to mixing with an all-in-one design. The plugin has knobs for sensitivity, gate, compress, bass, treble, output and fx. It also has buttons for bass drum, snare, hi-hats, overheads, toms and room.

The plugin is very simple to use. To utilize this, just put this on whatever drum busses you may have for the overall mixing and mastering. I've never read the manual, but it's not really needed with this as it's such a simple to use plugin.

Waves is the king when it comes to things like stability and performance. This plugin is great at using very little RAM and processing power. Considering there may be multiple instances of this plugin being used, that's a life saver. It's also very stable. I've never experienced a crash in relation to this program, and I've had probably seven or so instances of it on various drum channels. There is one problem, however. It's a 32 bit plugin. In today's world, most computers are moving towards 64 bit OSes and DAWs. Because of that, your DAW needs to run a special bridge application to utilize the 32 bit plugin in a 64 bit environment. Ideally, I'd like to do away with that, and I'm hoping Waves makes these all 64 bit compatible in their next update. I've been using the Waves Mercury bundle for the past six or so months now.