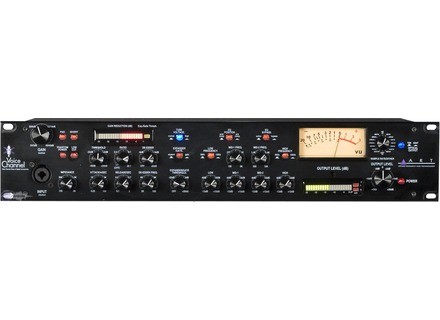 Art Voice Channel
4
Afficher la traduction automatique
Afficher l'avis original
The Art Voice Channel is an all-in-one channel strip and interface, with a built in microphone preamp, equalizer, and preamplifier. In terms of connections, it has an XLR/1/4" input on the front, as well as both 1/4" and XLR connections in the back. It also has ADAT, word clock, and a USB output to send it to your computer. It is rackable, as will take up two rack spaces in a traditional rack mount.

While there is definitely a lot of parameters and features to work with on the Art Voice Channel, after breaking down the unit a little bit I think you'll see that everything is pretty straight forward and that there isn't anything too out of the ordinary here. The mic pre has gain and impedance knobs as well as phantom power, a pad, invert (phase), and a lot cut option. The compressor has parameters for threshold, ratio, attack, and release, as well as de-esser with parameters for de-essing frequency and gain. There is also a gating feature available. The equalizer is made up of four bands, with the mid bands having both frequency and gain parameters, and the high and low just having gain. Lastly, there is an option for sample rate and an overall output leveler. As you can tell, there is a lot going on, so if you feel like you might need some assistance, the manual is probably a good thing to have around.

While the Art Voice Channel doesn't boast the most impressive tones available, it definitely makes up for this in versatility. While it is called a 'voice' channel, this most certainly can be used in a variety of situations as I have used it for both electric guitar and bass guitar in addition to vocals. Since it is tube based it does have a good amount of warmth, but isn't the cleanest sounding unit in general as it goes with thickness over clarity. Don't be fooled by the title though, this is an extremely versatile piece of gear...