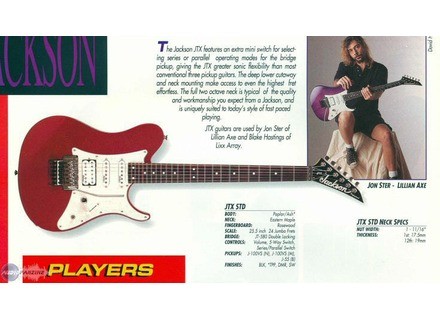 Jackson JTX STD
4
Afficher la traduction automatique
Afficher l'avis original
Jackson was never really into the whole tele thing. They were always either doing the superstrat kind of thing or just trying to be a bit more extreme by tapping into the metal market. The shape itself isn't really a true tele shape, but the single cut is definitely more on the traditional side. The guitar features an ash body, a maple neck with a rosewood fretboard, 24 extra jumbo frets, dot inlays, a licensed floyd rose bridge, HSS configuration, one volume, one tone, a mini toggle switch and a five way switch.

The fretwork on this had a bit of wear. Considering how old this is already, it's not a huge surprise, but it's something to keep in mind when buying one of these older guitars. The ends weren't sharp, so that was a good sign. The bridge on this was originally a licensed floyd, but it was replaced with an original floyd rose. It's a good improvement, in my opinion. The original floyd rose flutters better, stays in tune better and just sounds better. Another thing that was added to this was an oversized brass block. These help make the guitar sound quite a bit bigger, and it gives it some more sustain. The pots were a bit scratchy, so they needed to be either cleaned or replaced, depending on how bad they are.

Someone took out the original pickups and swapped in a JB in the bridge and SSL5s in the neck and bridge. The JB in the bridge is great for doing pretty much any style. One thing that really helps make this JB even better is the series/parallel switch. This doesn't work on the singles, but it gives the bridge pickup an extra bit of versatility. In parallel, it gives the guitar an almost tele-like sound. It makes it a bit hollow and gives it a neat spank. The SSL5s are normally bridge pickups, but in the neck, they give a pretty awesome, super high output single coil tone. You can do leads with ease thanks to the output, they sound thick enough to do legato, gave a pretty decent clean tone when in position 2/4 and matched nicely with the JB.