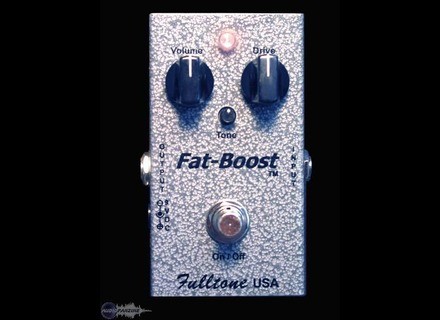 Fulltone Fat-Boost
5
Afficher la traduction automatique
Afficher l'avis original
I'm not really into this pedal so my review will dictate that unpleasant feeling towards it. This is a subtle pedal in that the effect it gives while very transparent is extremely low. You will hear a difference when you engage this pedal from your normal rig tone but it doesn't do a whole lot.

However, the way I believe it was designed was to use at the end of your signal chain and a line booster if anything. In this application it achieves the tone when loosing signal with long effects chains or long instrument cables. The Fulltone Fat Boost 3 is slightly different then is previous examples.

Pretty simple to use...it has two control knobs and two mini knobs that dial in the bass and treble as desired. When it comes to these types of pedals I am really looking for something that doesn't alter the tone. So when I see knobs to dial EQ I pass my interest very quickly. Especially it is something that is used as a buffer which ideally would have no EQ operation. Just a box and maybe one control knob like the Flying Dragon from Lizard Leg Effects.

Like I mentioned previously the sound is very good but not too much of a difference. I like using boost for amps on occasion but this doesn't do it for me. I think I would much rather get an OCD from Fulltone and run it as a clean boost. But if this thing is designed for the end of your chain than I would pass on it.

If I need an EQ boost than I would get an MXR EQ and be done with it. The EQing for me just kills this idea for a pedal. If I need a buffer than I'd buy one from Wampler.

I would pass on this pedal. They original pedals are harder to find now, but I think you can pass on it if you don't have long effects chains or long cables. Fulltone products are made to high quality standards so this pedal is very good quality but not a real need for it in my opinion.

Fulltone Fat-Boost
4
Afficher la traduction automatique
Afficher l'avis original
This is a boost pedal made by Fulltone. It's called the Fat Boost because in addition to simple volume boost, it fattens up your tone a lot. It has two 1/4" connections as well as an input for an AC adapter which will prevent you from losing tone. There are no MIDI connections, nor is there any computer options. This pedal is not rackable.

The editing on this pedal is pretty easy. There is a knob for volume and a knob for tone, as well as a smaller knob for input gain. It might be strange to have what appears to be two volume knobs on the pedal, but you'll soon notice that one is more of the clean boost while the other fattens, even drives, the tone a little bit. This pedal, like most pedals, eats batteries so I recommend using the adapter, it'll save you money in the long run. I don't have a manual as I got mine used but I don't think anyone would really need one.

I like this pedal a lot, but I don't know if it's my favorite boost pedal. While it is cool that it fattens up the sound, and sometimes gives it a light overdrive, I don't know if that is always what I am looking for. This is great if you play blues or R&B, or really anything with a clean tube sound, but if you play rock that is heavier, you will find that using this in combination with a fuzz or heavier distortion will make that signal muddier, which is the last thing you want, unless you're going for some type of lo-fi, mangled sound. The pedal colors the tone a little too much for my taste, as well. It's a cool pedal in its own right but I think I'd prefer a cleaner boost with my existing pedals.

While the pedal is cool, the coloring of the sound and the mild overdrive aren't exactly my cup of tea, especially since you'll get similar but better sounds from an overdrive pedal (not to mention more variety in tone). I would try the pedal if it sounds like something you'd be interested in but just make sure you know what you're doing if you're going to go ahead and buy it.
Ceci est une pédale de stimuler faite par Fulltone. On l'appelle le Boost Fat car en plus de stimuler le volume simple, il engraisse jusqu'à votre tonalité beaucoup. Il a deux 1 / 4 "connexions ainsi que d'une entrée pour un adaptateur secteur qui va vous éviter de perdre ton. Il n'ya pas de connexions MIDI, ni aucune des options informatiques. Cette pédale n'est pas rackable.