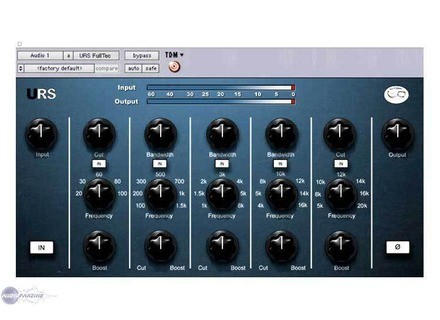 URS FullTec LE
5
Afficher la traduction automatique
Afficher l'avis original
The URS Fulltec LE was as easy to install as most plug-ins out there as the whole process didn't take long at all.  The plug-in didn't give me any compatibility issues or other problems and to this day it has run quite smoothly.  The interface of the plug-in is easy to follow as well, even though at first glance there looks like a lot going on.  The plug-in has five different bands, each of which has frequency, gain, and the middle three has bandwidth knobs and the outer two have cut knobs.  There is also a knob for input and output as well as buttons for in on each band and for the whole thing.  I don't know about any manual for this, but unless you are quite new to plug-ins I wouldn't think that you would need one.

Since day one, the URS Fulltec LE EQ has run smoothly within my configuration.  I run the plug-in on a Pro Tools LE system that runs with a Digi 002R audio interface.  The computer I run Pro Tools LE 7.4 on is a Mac Book Pro that has a 2.2 Ghz Intel Core 2 Duo processor and 4 GB of RAM.  How any plug-in will run largely depends on what kind of machine you are runnig it on, but as long as you have a decent computer to run Pro Tools LE on and you are able to run other plug-ins on it, I don't see why you wouldn't be able to run a few of these at a time.

I really like using the URS Fulltec LE EQ for a variety of reasons.  The first reason is the great interface because it is super easy to use and all users shouldn't have too much trouble with it granted they know the basic parts of an equalizer.  The next reason is the clean sound quality as this provides me with an EQ that can be used on just about anything.  URS offers a great line of plug-ins and the Fulltec LE is definitely one of the coolest EQs that they offer.  The plug-in is reasonably priced and for this reason it is a great option for home studio owners and professionals alike!