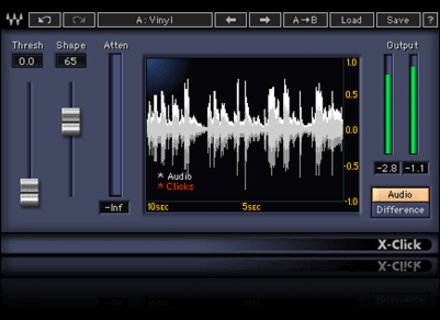 Waves X-Click
5
Afficher la traduction automatique
Afficher l'avis original
The Waves Ltd. X-Click is a plug-in that is a part of Waves' Restoration bundle of plug-ins. It is also found in many of the larger plug-in packs, including of course Waves Complete. I installed this plug-in along with the rest in the Complete bundle, which was one process as you install all of them at once. I didn't encounter any problems doing so, as it was just like installing any standard piece of software of bundle. While this is designed primarily for fixing up older recordings, it can definitely be used during mixing or other applications where you might want to remove a click or multiple clicks. It's awesome that Waves has developed a series of restoration plug-ins for different types of noises, making it easier than ever to get rid of sound you don't want. The interface X-Click is fairly simple, with a graph showing time and waveform, while it consists of parameters for threshold and shape, and metering for attenuation and overall output. That's everything that's involved with the plug-in, so I wouldn't think that you'd need a manual for this.

I'm currently running the Waves Ltd. X-Click plug-in on a Mac Book Pro that has a 2.2 Ghz Intel Core 2 Duo processor and 4 GB of RAM. I run it in Pro Tools LE 8 that I run with a Digi 002R audio interface. I've also used it a little bit on a Pro Tools HD system, but I've done the bulk of my work with this at home. I've had good experiences with the plug-in in terms of performance, as I've only needed to run or process with one at a time.

Waves X-Click
4
Afficher la traduction automatique
Afficher l'avis original
Transferring vinyl and other shellac style recordings to the digital world can be a real pain due to age and noise that occurs during the transfer. Those static noises and pops that occur can totally ruin what would otherwise be a great sounding recording. Thankfully, Waves has the X-Click plugin to help combat those issues. The plugin has adjustments for threshold, shape and different monitoring modes. It's a very simple plugin, and it's meant to only do one thing -- remove those static clicks from vinyl and shellac recordings. To use this plugin, just enable it on whatever buss you need to inside of your DAW and start adjusting. It's so simple to use that no manual is required.

Waves rules when it comes to things like performance and stability. I've never had a crash while using this plugin, and that goes for all of the Waves plugins I've used. They all seem super rock stable, and in something as mission critical as a recording environment, that's a huge plus. The plugin works on both Windows and OS X, so nearly anybody can use it without a hassle. The plugin itself doesn't take up much RAM or processing power which is another plus. There is one issue I have with it, but it's a somewhat minor complaint. The plugin itself is a 32 bit plugin inside of OS X. For my DAW, Logic Pro, to fully utilize this, it needs to run a special bridge application. Performance is still the same, but it's just a pain with the way Logic implements that bridge application because the plugin doesn't remain visible in the background. I've been using the Mercury bundle for the past six or so months, and it's been a wonderful experience.