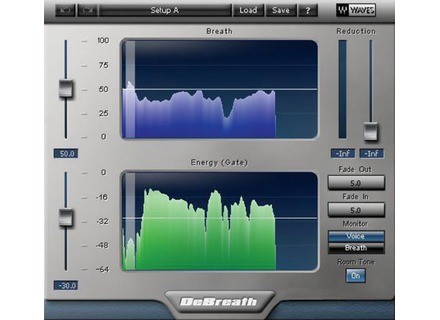 Waves DeBreath
4
Afficher la traduction automatique
Afficher l'avis original
The Waves Ltd. DeBreath plug-in is a unique piece of software that allows you to control the amount of breath heard in a voice recording. It's pretty simple to use and was easy enough to install with the entire bundle of Waves plug-ins. I haven't used the plug-in very often since I've gotten the bundle, but I have messed around with it enough to get a good idea of what it does. The interface is really pretty simple, as you can view either just the breath in your voice, or the full sound. It has to graphs - one for either voice/just breath, and one for energy (gate) threshold. It then has sliders for controlling the amounts of each, a reduction slider, fade in and fade out, and an option for adding some room tone to help your work sound more natural.

I'm running the Waves Ltd. DeBreath plug-in at home in Pro Tools LE 8 with a Mac Book Pro lap top. The computer has a 2.2 Ghz Intel Core 2 Duo processor and 4 GB of RAM, while I run Pro Tools LE with a Digi 002R audio interface. Thus far I haven't had any issues at all running the plug-in within this configuration. I haven't had a need to run more than one of them at a time however, so I wouldn't expect this to tax my system very much at all. Having said this, in general it doesn't seem like it will take up too much processing power.

The Waves Ltd. DeBreath is overall a really cool plug-in as there aren't any that I've seen out there that are quite like it. In theory it's a great idea, and the execution is pretty good here as well, as there is definitely a lot that can be done with the plug-in. You definitely need to know how to tweak the plug-in well, as sometimes it sounds more realistic than others, but in general I'd say the plug-in pretty much does as advertised. I'm not sure that I see myself using this plug-in all that much in the future, as I'm usually not one to tweak vocals this much. However, I definitely see why this would be a useful tool and I'm sure that in the future there will be times that it comes in handy. I wouldn't have bought it if it didn't come with the complete Waves bundle, but I'm definitely happy to have it.
Le DeBreath Waves Ltd plug-in est une pièce unique d'un logiciel qui vous permet de contrôler la quantité de souffle entendu dans un enregistrement vocal. C'est assez simple à utiliser et a été assez facile à installer avec le paquet entier de plug-ins Waves. Je n'ai pas utilisé le plug-in très souvent, depuis je suis devenu le bundle, mais j'ai foiré autour avec ce suffisant pour avoir une bonne idée de ce qu'il fait. L'interface est vraiment assez simple, comme vous pouvez voir soit juste le souffle de votre voix ou le son plein. Il a des graphiques - un pour chaque voix / à couper le souffle, et un autre pour l'énergie (GATE) de seuil. Il a ensuite l'ascenseur pour contrôler les quantités de chacun, un curseur de réduction, fade in et fade out, et une option pour ajouter quelques ambiance sonore pour aider votre travail sonore plus naturelle.

Waves DeBreath
4
Afficher la traduction automatique
Afficher l'avis original
Recording vocals always has one major hurdle one must face -- the annoying sounds during the "S" sounds. These can really hinder a mix and make it sound very unprofessional. This plugin is used to help fix that issue. It's not just for singing, however. You can also use it on spoken word/radio stuff. In fact, I find myself using it more for that than anything else. The plugin is super simple to use. It separates the breath from the voice, and you simply adjust the mix from there. To use this, you simply enable it on your vocal buss and start adjusting. I didn't experience any compatibility issues, so I can't comment on that. I never read the manual, but I don't think it's really necessary for these plugins. It's very easy and simple to use, so no issues there.