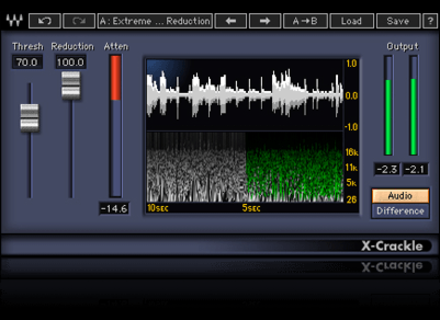 Waves X-Crackle
5
Afficher la traduction automatique
Afficher l'avis original
The Waves X Crackle came with a bundle that I have purchased and I really didn’t know what I was going to use it for it just seemed unusable to me at first. But there are a few things that I have used it for. The first thing was I have a ION turntable that can transfer Records right into the computer via USB chords. Now we all know what vinyl sounds like, and transferring it into your computer and making it an MP3 doesn’t make the crackle and static sounds go away, if anything the mp3 version enhances the crackles and hissing type sounds. So I decided to give this plug in a shot. Not knowing anything about it just briefly reading through the manual that came with it, I decided to use it on a vinyl that I just transferred to the computer. Almost immediately it took out most of the crackling old vinyl sound. Now I do love the old vinyl sound but when im listening to the old record in my ipod or mp3 player I don’t want to hear the crackles I just want to hear the music. The Waves X Crackle took care of all of those issues so fast it wasn’t even funny.

Installing this would have been really fast if I would have did it alone but I install a few other Waves plug ins at the same time so it took a little while. But like I said I had this for about 5 months and never used it because I didn’t feel the need to use it but now I use it a lot more often and sometimes it will go to use with some vocals that weren’t recorded clean at someones home studio when they send them to me to master. I can use this and it will take the HISS right out of the recording!

You cant go wrong with the Waves X Crackle, I don’t know why I didn’t get it when it first came out.

Waves X-Crackle
5
Afficher la traduction automatique
Afficher l'avis original
The Waves Ltd. X-Crackle plug-in is one that is found in the Waves Restoration bundle and is specifically designed to remove unwanted crackle sounds from vinyl and other recordings that need to be restored. You can only buy this plug-in in this or another fully packed Waves bundle. I have the full Waves Complete bundle, which includes every plug-in that Waves has including all of those in the Restoration bundle. You install all of the plug-in at once, so there's nothing specific to say about installing this one as opposed to the others in the bundle as it's all one process that should be easy enough to complete without issues. Each of the plug-ins has it's own purpose, so it's definitely a good idea to look at the entire bundle and not just this one plug-in when thinking about these Waves Restoration tools. Using X-Crackle is really simple, more so than most of the others in the Restoration bundle. It's just got parameters for threshold and reduction (crackle reduction), and audio and difference output monitoring choices. It also has attenuation and stereo output metering in addition the in depth graph that shows you where in the spectrum the crackle sound is happening. I haven't seen the manual for this plug-in...

I'm running the Waves Ltd. X-Crackle plug-in and the full Waves Restoration bundle on my home system, which is Pro Tools LE 8 based. I run Pro Tools LE with a Digi 002R audio interface and run everything on a Mac Book Pro lap top. The computer is running with a 2.2 Ghz Intel Core 2 Duo processor and 4 GB of RAM. This has definitely been an adequate enough system for me to run this plug-in without hiccups. I haven't used the X-Crackle plug-in as much as I have some of the others in the bundle, and when I have it has only been one instance at a time.

Waves X-Crackle
4
Afficher la traduction automatique
Afficher l'avis original
With old analog recordings, especially those that have been transferred from vinyl, most people tend to experience the infamous crackles and pops that occur. This can be a real pain to remove manually. Thankfully, Waves has created a nice, neat plugin to help remove any noise and static pops from those old vinyl recordings. The plugin is very simple to use, thankfully. Just enable this inside your DAW on your master buss and go to town. It has adjustments for threshold, reduction, attenuation, monitor mode adjustments and more.

I've been using the Mercury bundle for half a year or so now, and it's been awesome. I've never experienced a single crash or issue with any of these plugins, including this one. No matter how many plugins I tend to load, my machine still keeps chugging along. The plugin itself is cross platform compatible, so nearly anybody can use this on his or her favorite machine. Personally, I'm a Mac user, so I'm using OS X on a Mac Pro with Logic Pro. There is one issue that I've been having, however. For the OS X users out there, this plugin is a 32 bit plugin. That means that your DAW will need to utilize a special bridge application for this to work inside your 64 bit DAW. It's not a huge deal, but it can be a bit of a pain, depending on how your particular DAW handles the 32 bit conversion.

The plugin is definitely solid, and it does the job. However, I don't have many vinyl recordings laying around. In fact, I have zero. I had to actually borrow one from a friend to test out this plugin and see how well it works. It works nicely, but I simply don't have much of a use for this. That's one of the reasons why I rated it the way I did. It's solid, but I don't see myself ever using this again. I guess you could maybe try it out on something old tapes or something that may exhibit some of these symptoms, but I don't have any of those either. I'm 100% digital at the moment. If you work with vinyl a lot, I'm sure this would be great for you.
Avec vieux enregistrements analogiques, en particulier ceux qui ont été transférés à partir de vinyle, la plupart des gens ont tendance à subir les infâmes craquements et pops qui se produisent. Cela peut être une vraie douleur pour enlever manuellement. Heureusement, Waves a créé une belle, soignée plugins pour aider à éliminer tout bruit et statique POP de ces enregistrements de vieux vinyles. Le plugin est très simple à utiliser, heureusement. Juste activer cette l'intérieur de votre DAW sur votre bus master et aller à la ville. Il a des ajustements pour le seuil, la réduction, d'atténuation, les ajustements en mode moniteur et plus encore.